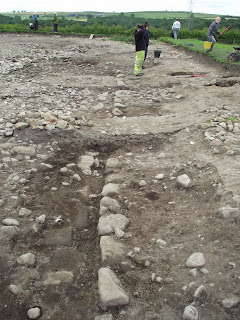 Just a quick one entry today. In Trench One, we've more or less removed all the stone from the interior of the medieval building, it looks like we may be reaching some kind of floor surface. Nearby, the stones that we thought might represent a revetment to the rampart are now looking more like a gully running along the intra-vallum road. Elsewhere, we continue to work on the pits- our revisitation of the pit inside the main building has paid dividends; it's revealed itself as being deeper than we thought and today Jonathan found two copper alloy rings in deposits near the top. In Trench 2, more work trying to find the edges of the robber trenches, particular in the eastern strip building. We've also been picking away at the surfaces to the south of the large eastern building. In other news, we've got the coring kit on site now. The plan is to carry out some coring for possible peat deposits in an low-lying area to the north of the site- possibly a side-valley of the Bell Burn that runs along the northern edge of the gravel plateau on which the fort and vicus stand. 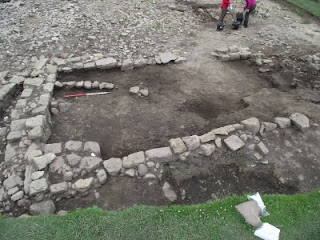 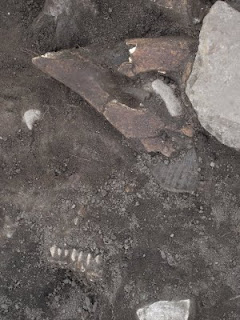