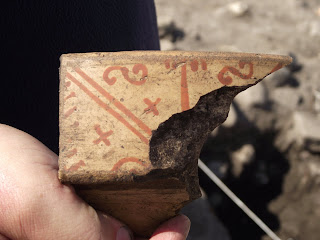 Today begun with some of us carrying the coring equipment down to the place that shall henceforth be known as the 'big marshy bit'. After some initial concern that the place was too big and too marshy, we found some more solid ground and Carrie and Charlotte and their merry band of helpers were able to do some useful exploration. Although initial soundings suggested that there was little suitable peat, and the last minute a couple of more substantial deposits were identified and will be properly cored tomorrow.

On site there was great progress in both trenches. In Trench 1, almost the entire interior of the medieval building has been removed, although there is no trace of a convincing floor surface. Some rubble remains on the eastern end and there are hints that the actual eastern gable wall of the structure survives beneath this, and that the row of stone on the embankment we'd always assumed as the end wall is nothing to do with it. Along the ramparts, the roadside gullies are becoming increasingly clear and we've made great progress on two substantial pits cut into the rampart. Otherwise, its been business as usual on the other pits, although Hilly found a nice ring from the big pit.

In Trench 2, we've returned to our big pits and have exposed more stone linings- intriguingly we appear to have also identified a possible gully running between the two largest pits and cutting through the wall of the Roman structure within which they lie. Gary also found a nice piece of carved architectural stone in the eastern-most pit. Some nice finds, including a lovely piece of painted Crambeck ware from Sue and a nice seal box found by Jake. We've also seen the return of the planning frame with lots of planning being carried out. We've also fully exposed the inscription! It didn't go too far into the section- picture tomorrow! 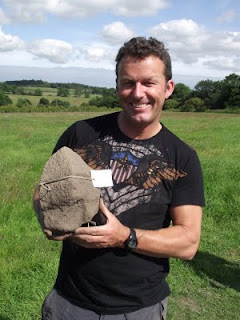 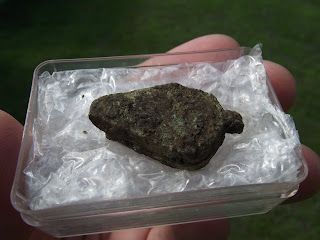 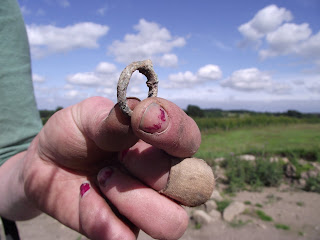 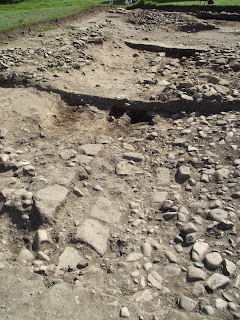