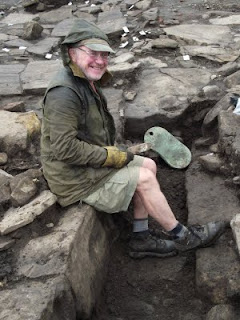 A bit of a wet day today. In fact, a very wet day, but despite the rain the team did incredibly well, working through all but the heaviest downpours. Nonetheless, the sheer quantity of water on site did constrain our work programme, as many of the bigger pits were simply too slippy to work in and other areas were very muddy. Nonetheless, some progress was made.

In Trench 2, work moved forward on the roadside ditch, with two stretches being explored. Elsewhere, the weather forced us to concentrate on looking at the road surface, and some more stones were removed. At the far west end of the trench, people quietly worked away, and have revealed what might tentatively be traces of an oven or kiln.

In Trench 1, planning continued. Most significant was continued picking away at the stones around the eastern end of the small medieval building. This confirmed that the dump of cobbles ran under the probably eastern gable wall and are thus earlier- but how early?
Posted by David Petts at 12:02