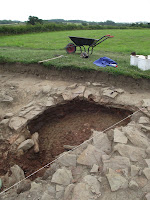 As usual there has been lots of action on site, but for me its been 'a day of three ovens'. The first two are in Trench One. They are both circular stone-lined features built into the clay make-up of the rampart. The first one (see above) has been going through the process of cleaning for the last week or so, and finally we are starting to make headway with a section through it. It's clearly been fired extensively, with the stone showing reddening (although not to a very high temperature); it may well be a bread oven. After removing what appears to be the collapsed stone from the top part of the structure, we've revealed a clay surface that has also clearly been heated. It is quite well built and so far several courses survive. 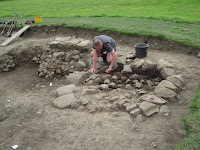 It contrasts with the other oven further down the rampart (see below). This lies between the small medieval structure and the corner of the trench. This does not contain anywhere near as much as reddened stone, although it has clearly been burnt. It is also of a different structure, being built up of larger stones than the first oven, which mainly consists of small, stone slabs. The base is also different, with several large flat slabs forming its bottom. It is possible that it is related to the medieval building which it abuts. It may be a corn-drying oven, although this is sheer speculation at this stage.

The final oven worth mentioning is one that appears in the centre of the second, poorly preserved strip building in Trench 2. This is stone built, and unlike the other two, is rectangular. Today, Morris exposed a nice Roman floor surface within the building. Interestingly, the oven appears to be separated from this floor by a good 4-6 inches of dark soil, suggesting it post-dates the stone floor. There was a possible later floor surface, but this was much more inconsistent and patchy, largely comprising rubble patches and clay areas. Whatever the precise sequence, it does appear that this oven is one of the later features within the building.
Posted by David Petts at 14:09