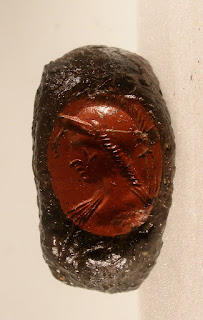 It has stopped raining and (for the moment) the sun is out. Only two weeks until we start work on site for the 2012 season of excavations at Roman Binchester. This year we will be digging from June 6th to July 27th, giving us seven weeks of archaeology fun to look forward to. Our current plans are to continue working away at Trenches 1 and 2, as well as carrying out two evaluation trenches to the north of the site on an area of possible industrial activity and a potential cemetery. As usual, for the first three weeks our workforce will consist of Durham University 1st year archaeology students, whilst the final month will be staffed by a party from Stanford and Texas Tech, members of the local community and, for the first time, participants in the Fulbright Commission Durham University Summer Institute. This means we are going to have 60-70 people on site each day, so we should be able to make good progress. Whilst one never knows what we're going to find, hopefully this season will see us completing the excavation of the 'animal processing' phase and getting stuck into the late Roman phases in the fort and the vicus. Although this is my first blog entry since September this doesn't mean that nothing has happened over the winter. Students and members of the local community have been beavering away in our labs processing the huge number of finds we recovered. We've also seen research begun on aspects of the environmental archaeology. One of our MSc Students Cameron Clegg is looking at the animal bone from Trench 1. So far one of his key conclusions is that the perceived over-representation of head and foot bones is not born out by closer analysis, with a wider range of body parts represented. This knocks away one of the main supports for our hypothesis that the major phase of animal processing of late 4th or early 5th century date was tanning. Instead it is increasingly looking like general butchery on a very large scale. Other interesting identifications include a possible bear bone - this has yet to be confirmed for sure, but a bear bone was also found at the Roman settlement at Catterick, a little further down Dere Street. We've also found some probable fallow deer bones- these are usually assumed to be a Norman introduction, but there is a small, but increasing amount of evidence that they were found in Roman Britain. If our bones are of Roman date, then this makes it the most northerly example of Roman fallow deer identified so far. We hope to work with the major Dama International (Fallow Deer and European Society 6000 BC - AD 1600) project at Nottingham University to investigate this further. Jamie Joyce, another one of our MSc students has been looking at the wider assemblage of environmental samples from "Hilly's Pit", the large pit which lies in the eastern corner of Trench 1. He has discovered traces of charred heather in most layers, suggesting that turfs/peat may have been burnt as a fuel. He has also found no evidence for tree bark sclereids - the presence of large quantities of bark would have supported our 'tanning hypothesis', but again, the evidence for this is now clearly lacking Don't forget, from June 6th I'll be updating this page daily throughout the excavation season so do check back.
Posted by David Petts at 04:03 No comments: