Just a quick note to flag up the latest developments on the project. First, we're nearly finished with the processing of the pottery and bone from the 2009 season thanks to the tremendous efforts of members of the Durham and Northumberland Archaeological and Architectural Society, who have performed wonders. Second, we're in the middle of finalising plans for the 2010 excavation season, which will run roughly during June and July this summer. We'll provide more details once we have them. Finally, whilst I was down in London yesterday for a meeting of the Archaeology Committee of the Roman Society I was able to spend some time in the British Library. Whilst I was mainly working on stuff related to another research project of mine, I also had a chance to do a bit of chasing archival material related to Binchester, and I was able to track down a late 18th century view of Binchester as seen from Bishop Auckland. It was drawn by the Swiss artist Samuel Grimm in the 1780s during a tour he took through County Durham and Northumberland. It shows Binchester Hall and its surroundings, although little can be seen of the Roman remainsa at the site. I shall arrange to have a scan made of the image and when I get it, I'll pop a copy on the blog.
Posted by David Petts at 04:58 No comments: 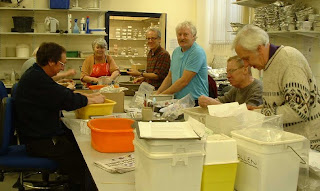 One of the key tasks during the post-excavation process is the basic washing, marking and recording of the artefacts. This season we recovered roughly 7500 fragments of pottery, 2000 fragments of Ceramic Building Material (both of mixed Roman and medieval date), as well as around 3000 fragments of animal bones. This is on top of all the metal objects and small finds which were found during the ten weeks of the dig. All this pottery and bone needs to be washed clean and then marked with the site code and context number, so we know where it came from. This is, not surprisingly, a labour intensive process. Until now the bulk of this work has been taken up by Durham students. However, today saw a new workforce coming on line- members of the Durham and Northumberland Archaeological and Architectural Society, one of our key project partners. Many of them spent time digging with us during the summer and are now taking the chance to see what goes on out of season. Later this year some of them will also have the chance to become involved in exploring the environmental archaeological aspects of Binchester.
Posted by David Petts at 06:14 No comments: