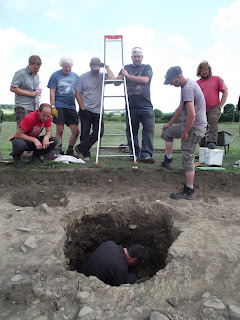 Welcome to all those who have found their way to the Binchester blog following our appearance on Digging for Britain. I want to take this chance to bring all our new visitors up-to-date about progress on site. When Alice and the Digging for Britain crew came to visit us, we were only three weeks into a ten week excavation season. Not surprisingly much has happened since they did the filming.

We have two trenches at Binchester. Trench 1 is situated within the fort itself. We continued to find increasing evidence for our possible late Roman tannery, including at least one small well which may have provided water for the process. Several more processing pits were uncovered, all containing lots of cattle bones. Our bone experts have had a quick look at the material and confirm our impression that the assemblage is dominated by skull fragments and feet bones. On the basis of the teeth surviving in cattle jaws it appears that they were mainly being slaughtered at the age of 3 or 4.

Elsewhere in Trench 1 we continued with excavating our main barrack building. This is almost certainly 4th century in date, but shows evidence for continued re-use and re-working well into the late 4th century and possibly later. Although appearing to be one long structure, close analysis makes it clear that it was actually constructed in several individual builds. None of the processing pits which surround the building cut the walls, indicating that it was still standing when this part of the site was given over to industrial activity.

Along the eastern edge of Trench 1 we made great progress with the investigation of the ramparts, we identified a stone lined drain that ran along the interior of the rampart and may have marked the edge of a road that ran round the inside of the fort. We’ve also excavated a rather nice example of a Roman bread oven. Finally, in the south-east corner of the trench we continued work on a small building, which we are now certain is medieval (12-14th century AD) in date. This appears to have been associated with another small circular oven, possibly used for drying grain before grinding it into flour. 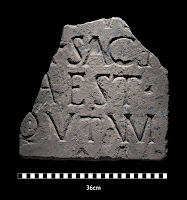 Our second trench (the imaginatively named Trench 2) is located to the east of the main fort and fronts onto Dere Street, the Roman road that ran from Hadrian’s Wall down to York. In this area we have excavated two so-called ‘strip buildings’ these are long narrow buildings that were probably used for some kind of craft or light industrial activity. It is from the better preserved one of these that we located good evidence for the production of jet objects, including lumps of raw jet (probably from Whitby). These buildings had their narrow ends facing onto Dere Street and we’ve started to get a good understanding of the street frontage itself, including a substantial roadside drain and a number of socket stones which may have supported awnings or a veranda. At the eastern end of our trench we made great progress excavating a larger stone building. This had more substantial stone walls and in places traces of wall plaster still remaining on the interior walls. This structure also had evidence for at least two splayed openings in the walls, possibly doors or windows. We are hypothesising that this building may be part of a bath-house. Excavations in the early 20th century just to the north of our trench revealed a circular bath-house and the proximity of our structure suggests it may be part of the same complex. One of the most exciting finds we made in Trench 2 this year was a fragment of a stone inscription which appears to record the dedication of a small shrine (sacellum) by one of the cavalry officers at the fort. It is quite possible that the shrine referred to may have been within the bath-house. We also discovered a small stone altar nearby. 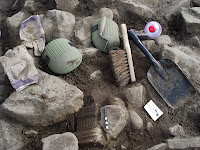 However, as in Trench 1, Trench 2 contained a whole series of substantial stone-lined processing pits associated with substantial quantities of cattle bone, which we again believe is evidence for large-scale tanning at the site. Two of the largest pits cut through the floors of the ‘bath-house’ but do not cut through the walls, suggesting that at the very least the walls were still standing to some extent. 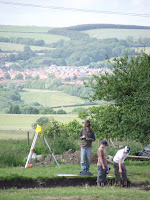 Despite the discovery of the inscription, the altar and a number of other exciting finds including are amounts of pottery, glass and bone, for me the most exciting story this year has been our appreciation of the extent and scale of the probably tanning on the site. I want to make clear, we don’t have absolute evidence that tanning was the process being carried out here, but at this stage, it does seem the best explanation for the large number of pits and gullies and the distinctive nature of the bone assemblage. Since the programme, one of the key areas where we’ve developed our understanding has been in terms of the precise dating of this industrial scale activity. It seems from the initial survey of the ceramics that large-scale pottery use in our excavation areas had declined by approximately AD380, although we know from our coins that there was continued economic activity of some kind until the very late 4th century. We’ve had two initial radiocarbon dates from plant macrofossils preserved in the processing pits, one from within the fort and one from the vicus. The result from the fort has the possibility of being sub-Roman (50% probability of being after AD 400), though the date from the civilian settlement has much less chance (4.2% after AD 400). This may suggest that the tanning fits into the very final years of Roman activity rather than further into the 5th century. However, it is important to emphasise that we have only had a very small number of dates so far, and we are planning a more substantial programme of dating next year.

Overall we can hypothesise that we have a very large tanning industry of very late Roman date. I know of no similar parallels from elsewhere in Britain or indeed the western Roman Empire. On the programme we suggested that this tanning might be situated in the context of a sub/post-Roman power centre at the fort. Given our more refined dating evidence, I feel that we might instead be looking at large-scale Roman military processing , possibly a military factory of some kind. The army would have had a great demands for leather (for shoes, horse-harnesses and tents) and it might be that Binchester became a supply depot. Of course, we still have much more to do on site and our understanding of the situation will undoubtedly become more subtle and developed.

So what are the plans for the future? We have two more excavation seasons on site (2012; 2013). We aim to continue to explore our two trenches and crack on into the Roman stratigraphy. We’ve also plans for a couple of smaller evaluation trenches on areas of interest flagged up by our extensive programme of geophysics around the site. There is also a programme of scientific work, including lots of soil geochemistry being carried out by students from Northumbria University and hopefully a pilot project to assess the potential of bone chemistry on the animal bones to see if it can help define where the animals are coming from.

For more information about the project keep on checking our blog or visit our website to read our annual interim reports and explore a range of other related literature about the project. As always, if you have any queries or questions please don’t hesitate to drop me a line.

And finally, for an alternative view of Binchester have a look at this!
Posted by David Petts at 02:27 1 comment:

Digging for Britain: Binchester on TV 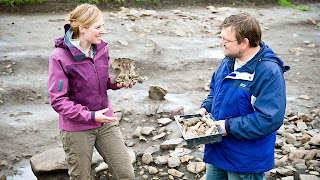 Earlier this year we were filmed for the BBC2 Archaeology series Digging for Britain. The episode which we are in is being shown this Friday (9th September) on BBC2 at 9pm with a repeat on Sunday (11th September) on BCC2 at 6pm. It will probably also be on I-Player for a while. Let us know what you think!