First of all, more on the C14 dates. I asked Andrew Millard, our radiocarbon guru, to have a look at our dates. He has recalibrated them using Oxcal and come up with the results in the figures. According to Andrew, the first clearly has the possibility of being sub-Roman (50% probability of being after AD 400), though the second has much less chance (4.2% after AD 400). This works well with our current understanding of the site and there is clearly much to be gained from further dating work.

On site, we've continued to make good progress. In Trench 1, the oven in the rampart is starting to look really nice, and we've just started looking at the other possible oven feature which is crammed between the small medieval building and the edge of the trench. It looks like we may have finally bottomed the big pit (although it won't be the first time we've thought this). In the main building, having done some planning and photography, we're able to crack on with exploring the floors in the northern compartment. Jonathan's work on his internal pit is also showing that like some of the external pits it was placed immediately adjacent a wall which then shows signs of subsequent collapese (see picture below).

In one of the pits to the west of the building, we've had some great finds. Not content with having removed a number of large iron objects, possibly tools, Rosie went on to find what appears to be an iron ring with an intaglio setting (see picture below). This should hopefully scrub up quite nicely.

In Trench 2, the flagstones down the side of the strip building are looking good, although some were clearly removed in the same phase of robbing that removed some of the wall. Otherwise over here its mainly been recording work, although in the far eastern end of the building AR and Patrick have been quietly working away on the wall which sits immediately in our trench edge and are exposing some lovely stretched of walling which appear to be going down a long way! 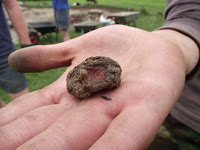 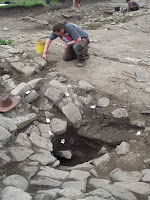