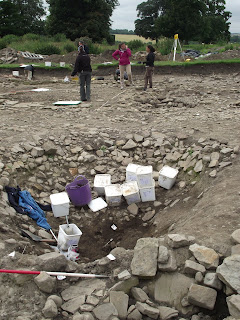 We’ve finally received our long-awaited radiocarbon dates today. Just to remind you, we sent off two samples for dating. One was a charred seed from the large pit in the north-east corner of Trench 1 (Hilly’s pit) and the other was a charred seed from one of the large stone-lined pits cut into the inside of the large structure at the east end of Trench 2. Our key aim was to get an initial impression of the date of these pits and the related hollows and gullies, which seemed to comprise a distinct phase of activity across both sites and were consistently, associated with large quantities of cattle bones (mainly head and feet). We have been assuming that these features dated to either the very end of the Roman period or the period immediately following (ie late 4thcentury into the 5th century). However, although stratigraphically they were clearly later than the main phase of Roman activity, we could not be certain about how late they were, although there was a noticeable lack of medieval pottery from them. As once the Roman pottery industries ended in this region, substantial pottery use did not re-emerge until the post-Norman period, our pits could in theory date between anywhere from c.380 to perhaps 1100
The new dates have now confirmed that this phase is very much a feature of the late 4th to early/mid-5th century AD. To be precise, our dates are as follows

The first date is a little confusing and has produced when calibrated four distinct possible dates – I’ll need to find out more about the implications of this. We can probably eliminate the earliest possible date on the basis of the stratigraphy and the artefacts (pottery) within the feature. However, at this stage it looks like the features date to the late 4th or early 5th (with a possibility that the Trench 1 activity may date as late as the later 5th or early 6th century AD).
Inevitably, there are some possible limitations we should flag up. The key one is that they dates were taken on plant seeds. These are very small and could conceivably be redeposited from earlier layers, so the features may in fact be later than the current dates suggest. Nonetheless, the dates are broadly what we are anticipating and there are no nasty surprises
The dates are also broadly consistent with some of the dates from the excavations on the Commander’s bath-house. These (after statistical analysis) suggest that the bath-house ceased operation and became a focus for animal butchery in cal.AD370-400 and the butchery ended cal.AD370-410 with the end of the use of the structure in the workshop occurring by cal.AD390-430 (see Ferris 2010, 538). I'll have some more thoughts and comments on the C14 dates tomorrow.

This is not the end of the story though. In the autumn we will try and arrange a more substantial programme of dating. This will probably use the animal bone as it is less likely to be residual. We will also aim to get a sequence of dates from stratigraphically distinct layers within the same features as this will allow us to utilize some complex statistical techniques which will help refine the date ranges down more precisely. All very exciting!

Despite all the fun and games with the C14 dates, we still have work to do on site. In Trench 1, there has been good progress on cleaning and recording the floor surfaces in the main building – all now of course needing proper planning. Inevitably, more work is required on the pits. The large oven in the rampart is now being sectioned and is looking particularly nice. In Trench 2, work along the pit in the far corner is revealing more stretches of unrobed wall, some again with in situ wall plaster. The roadside ditch by the second strip building is also looking good; we’ve been able to get a look at the front of the building where there aren’t large threshold stones. It is possible that we have a lower area of drain, but this will require further exploration. Finally, plenty of work on the western side of the main strip building is proving profitable- we’ve now exposed a large area of flagstones running down the edge of the building (although robbed out in places) – these seems to be some kind of side alley running off the main street. 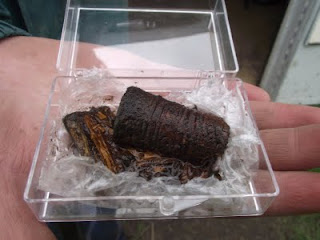 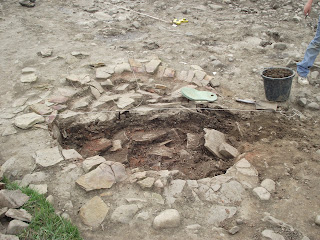 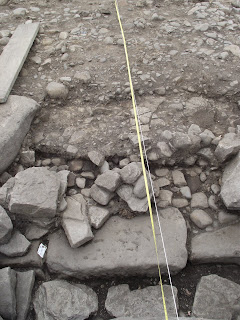