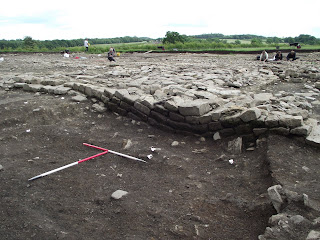 Well, we're back in action at Binchester. Last week was the calm before the storm, as around 60 people started on site this morning. The new team consists mainly of the US team and members of the Durham and Northumberland Arch & Arch (plus a small band of miscellaneous extras and hangers on!). The sheer number of people has allowed us to really crack on with some of the key, labour intensive jobs that still needed to be done. Starting in Trench 2, we've got a series of small teams removing the remaining baulks across Dere Street; this means we should soon have the exposed the Roman road surface across the length of the trench. This has already also started to reveal new areas of street frontage with large flagstoned areas. We also have a team tackling the final remaining large ridge of rubble that runs roughly parallel to the road in the centre of the site, in the area between the strip buildings and the larger structure. This will give us a chance to start recognising any areas of potential activity in this zone, for example, floor surfaces or evidence for further pits.

In Trench One, we've started to dismantle a lot of the cobbles and surfaces around the southern end of the barrack and the associated with the medieval building. Intriguingly, yet more sections of wall (or at least stone structure) are starting to be exposed, confusingly, not on the same alignment as the fort or the later buildings. Typically, most of these appear to disappear under the edge of our trench. Elsewhere, we've been picking out stones from the interior of the small medieval building. Elsewhere, we are renewing our assault on the ramparts, exposing the clay bank and a small stretch of further walling. We've not gone back into the big pit yet, we're saving that for Hilly when she returns. However, we have been picking around its edges, trying to clean up the surrounding surfaces.

Finally, we've started trying to identify possible samples for radiocarbon dating. Although we hope to have a proper campaign of C14 dating in the autumn, we're keen to get one or two dates now, just to confirm the absolute dates of all our 'tannery' features. In costs a lot to get rapid turnaround on dates, so we can only get two done; which means one from each trench. We are currently hoping to get a date from one of the plum stones in the big pit in Trench One and Carrie is hoping to identify a suitable candidate for a date from the environmental samples from one of the large pits in Trench Two.

NB:the photos for today's entry is from the previous week- my camera download cord is knackered :(
Posted by David Petts at 14:07