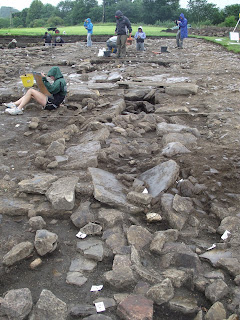 Another active day on site. Starting in Trench 1, we seem to have bottomed out the possible well, or at least finished removing the rubble fill. It is possible that it may continue going down, but we'll need to ensure we've got the sides properly explored and have a think about the practical health and safety issues too. Lots of work going inside the main barrack building, particularly in the northern compartment, where we are starting to get a better understanding of a series of partly preserved floor surfaces. Along the western side of the building the pits continue to get bigger and deeper; the large pit towards the south end of the building appears to contain a stretch of gully or wall foundation, not clear whether it just sits in the base of the pit or is something the pit cut comes down on to.

In Trench 2, we've made great progress on the roadside ditch/gully, which is coming up very nicely in several locations, although it is less clear towards the west end of the site. In the large building we've started revealing some courses of masonry in the section. The trench edge comes down right on top of a stretch of wall. It's upper sections appear to have had their facing stones robbed out, but we've now reached lower, where the original facing stones survive in situ. More clearing in and around the small extension, revealing wall plaster seemingly surviving on all interior walls. In the middle, less well preserved strip building we seem to have identified its northern gable end. I'd been assuming the building was the same length as its western neighbour. However. it is metre or so shorter; we've just picked up a stump of return wall and the remains of a robber trench which has removed the rest of the wall. This robber trench was itself mostly cut away by the west-east 18th century ditch. The clarification of the building dimensions is interesting. This area has always been the one place where it seemed that the post-Roman stone-lined pits and related surfaces actually cut the Roman wall lines. However, now we're more certain where the wall actually was, it is now clear that the pit and surface were actually outside the structure, and probably just butted up against the exterior north-end of the strip building. 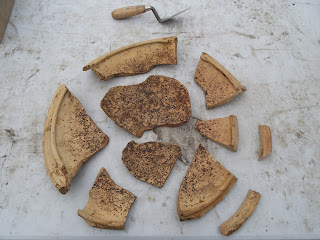 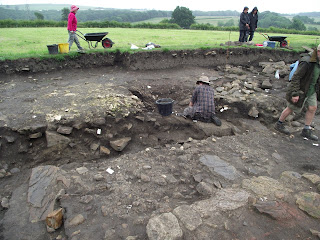 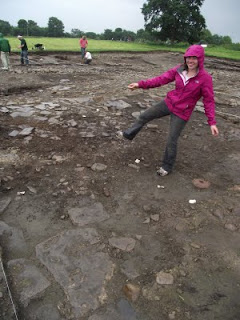 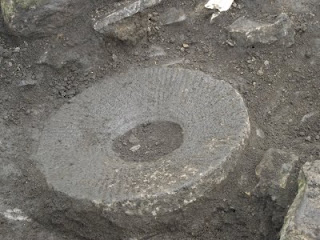 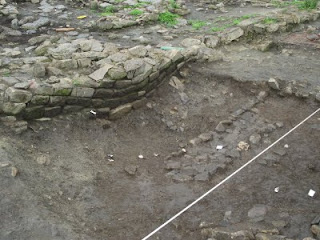