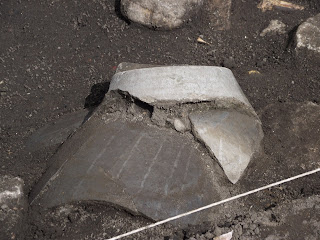 I wasn't on site today, not because I was being idle, but because we had a visit from our Roman pot specialist, Jerry Evans, who came to give our ceramic assemblages an initial perusal and give us his first thoughts. Although much of our pottery from this year's work is still needing processing, we were able to show Jerry much of the material from the two previous seasons and a few select assemblages from the current season.

His key conclusion is that the sequence of pottery from both our trenches extends to around AD380, although there is very little at this stage to suggest that it extends later into the end of the 4th century or to the early 5th century. This is a contrast with the ceramics from previous excavations in the bath house, where the ceramic profile is indicative of a slightly later date. Intriguingly, the evidence from the pottery contrasts with the evidence from the coinage. Our latest coins are are three copper alloy nummi of the House of Theodosius dating to the late 4th century. This may be a real difference or it may simply be due to the fact that Jerry was only able to look at a proportion of our overall assemblage. However one looks at it though one of the key messages we can take from this is that the vicus at Binchester continues in use much later than many of the more northern vici. Our first carbon 14 dates our due back at the end of next week - this should provide some more chronological data to throw into the mix!
Posted by David Petts at 14:03