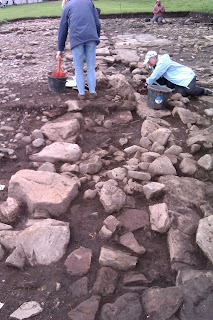 I wasn't on site today, so the latest despatch from the trenches is courtesy of Jamie "The Hat" Armstrong - the Trench Two Terror!

"Despite gloomy predictions the rain held off, aside from some minor showers. This allowed us yet another full day of work. It was the first day on site for a new contingent of Texas Tech students, as well as a new batch of volunteers comprising a mix of hold hands and new faces. The heavy rain over the weekendu, while not good for the archaeology event at Binchester, was great for freshening the trenches up again, allowing colours to be distinguished more clearly once more.

There were a variety of tasks in trench 2, including the almost obligatory cleaning of the road for the new starters. More work on the robber trenches was carried out, allowing a much clearer outline of the second strip-building: it appears that we have located all four walls for this building. We have also been working on defining what we are confident is the roadside drain along the edge of the street frontage (see pic), and will begin exploring this in the morning. Further work in the stone-lined pits has found what could be another phase of lining in the smaller pit. A large lead O was found in the larger pit by Steve (see pic).

I only got a chance to zoom round trench 1 right at the end of the day, so can say much less about that: excavation of the well continued with the removal of more rubble infill, although by the time I saw it it had been covered and fenced off. The intravallum drain is now very clear. Yet more work was undertaken on the pits, as well as within the barracks block to explore the interior. Initial cleaning of the oven was carried out (see pic) presumably to continue from where it was left off last year. Finally the area of the barracks block that has been found to have a slumping wall has been excavated to a level where a possible drain can be seen (see pic)." 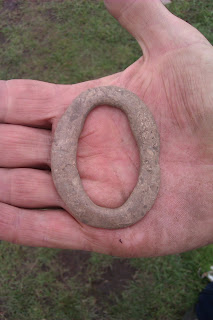 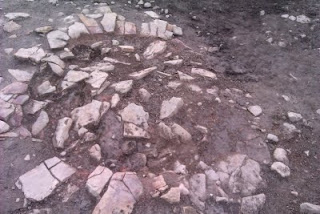 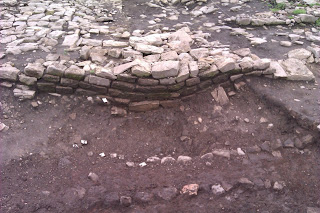