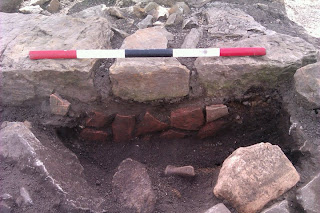 After a great trip to Lindisfarne and Bamburgh Castle yesterday, it was back to the grindstone this morning. In Trench Two there is plenty of planning going on, which is keeping people busy. The work on the roadside ditch is particularly pleasing and it looks like we might now be able to recognise some earlier phases of road surface in the ditch section. In the big building, there were still people beavering away in the large pits. We've also been poking aroun in the rubble that runs through one of the splayed-window/door openings. In the course of this a rather pleasing areas of tile edging on the inside of the opening (see photo - provided by Jamie Armstrong). In Trench One, the pits get deeper... Hilly found a rather nice piece of Roman belt-fitting(?) in hers. We've also been plugging away at the interior of the small medieval structure.

A couple of interesting visitors - Professor David Mattingly from Leicester University passed through (he gave a lecture in the Department in the afternoon, so a lot of the US team went back early to hear it); we also had a visit from Andrew Birley who leads the fantastic excavations at Vindolanda. We visited Vindolanda a few weeks ago and came away green with envy at the sheer quantity of finds they have recovered (although they have had a 30 year head start on us...). Both David and Andrew seemed interested in what we had to show them, which can only be a good thing!
Posted by David Petts at 14:16