GSB Prospection, who carried out the geophysical survey for the Time Team investigation at Binchester a couple of years ago have posted a couple of interesting videos on YouTube. They are videos demonstrating the results of the Ground Penetrating Radar survey on the mausolea in 3-D. There is a video of a horizontally-rotating GPR model, a vertically-rotating GPR model and an amplitude-slice animation. Fascinating stuff!
Posted by David Petts at 05:04 No comments: 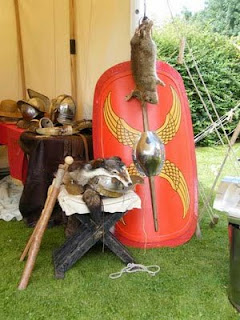 Only a brief message to say that I've been having endless technical problems with Flickr (I can upload my images but I can't seem to make them public...), so I've created a Picasa album for this year's fieldwork at Binchester. Its mainly general site and working shots rather than detailed records shots, but there area a number of the recent photographs by Aerial Cam and also some images of our summer open days.
Posted by David Petts at 07:27 1 comment:

As promised the latest results from the geophysical survey carried out last week at Binchester. The image here shows the combined plot of all surveys carried out on the site including work previously done by Geoquest and GSB Prospection. The recent work carried out by Archaeological Services and funded by the Roman Research Trust is the large (5ha) L-shaped area to the north of the fort.

It clearly shows extensive activity outside the fort in this area, including possible stone-founded buildings close to the northern corner of the defences. There are also a couple of large enclosures with some kind of activity within them in the north-eastern corner of the plot. It is not clear precisely what these are, possibilities include Late Iron Age or Roman rural settlements, areas of industrial activity or possibly even cemeteries.

NB: October 12th: new version of the geophysics posted with correct logo DP
Posted by David Petts at 10:10 No comments: