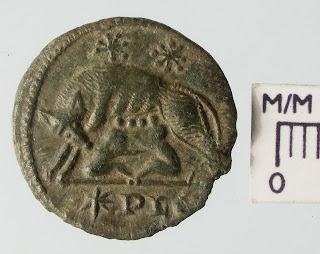 Next week at the same time, you'll get a chance to hear myself, Alex Woolf and others talking about the end of Roman Britain. Enjoy!
Posted by David Petts at 11:48 No comments: 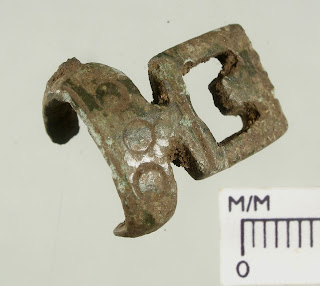 Just a quick note to say that I've uploaded some new images of some of this year's finds to the Binchester Picasa web album - scroll down to the bottom of the page to see the pics. I hope to shortly upload some of the fabulous aerial shots taken for us by Aerial-Cam, and hopefully some of the early versions of the site plans from this year's excavations.
Posted by David Petts at 03:37 14 comments:

As term starts, we are getting back on course with the post-excavation work on the proejct. This includes tackling the huge amount of finds work that needs dealing with. Recently, Jenny Jones has been X-raying some of the ironwork recovered from site, which has thrown up some interesting results. What we thought was rather a nice knife blade has turned out to be a pierced iron bar, but another object (see picture) has turned out to be a simple iron stylus, probably used for writing on wax or wooden tablets- a nice indicator of literacy at the site.
Posted by David Petts at 01:32 1 comment: 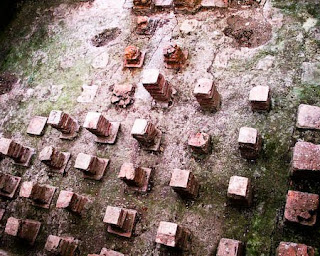 Great news from both the Durham and Stanford teams. The Department of Archaeology at Durham University, has recently been ranked second in our subject in the Times Good University Guide 2011 and in the 2011 Complete University Guide. We are already ranked as the leading research department in the Research Assessment Exercise in 2008This is testimony to the Department's success in all aspects of the university experience. Meanwhile, the graduate program of the Department of Classics at Stanford ranks at the top of 31 Classics programs in the United States rated by the National Research Council (the main university ranking system in the US).
Posted by David Petts at 08:27 No comments: 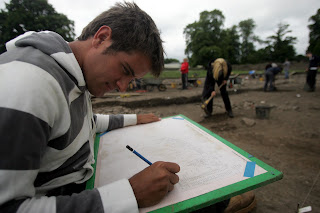 Catching up with Binchester. Apologies for the lull in activity with this blog since the end of the excavation. However, things have not been quiet with the project. Although the Stanford team headed back at the end of July, we kept the excavation open over the rest of the summer so visitors to the fort could see the fruits of our labours. We were also able to get some overhead shots of the two trenches taken by Aerial-Cam; they really show the site to its best. I’ll post some of these wonderful images in upcoming days. We finally got the site covered over last week (thanks to help from members of the Durham Archaeological and Architectural Society. Still much to do though. The major job is to crack on with the finds processing, particularly washing and marking up all the ceramics and bone recovered this year. This will be done by members of the Durham Arch and Arch and students from the Dept. of Archaeology at Durham University- it should keep them busy!
Posted by David Petts at 03:54 No comments: