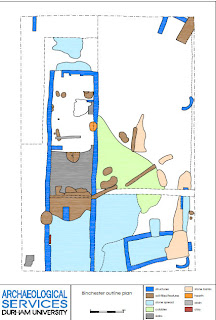 The post-excavation work on the project continues apace. We've got the site plans digitised and I've attached a copy of an outline plan of the 2009 season excavations; this is only a schematic overview - the on-site plans were extremely detailed and included drawing every single cobble and slab that made up the many rubble surfaces.
The dark blue shows the key structural features, including the large rectangular barrack block that takes up most of the western half of the site. The smaller rectangular building in the south-east corner is probably medieval, although we don't know whether it's pre- or post-Conquest (my money is on the latter, though I'd be agreeably surprised if it was earlier). The other stretches of walling along the eastern and northern edge of the site and the north-east corner are features built into the rampart of the fort and of Roman date (we think)- certainly the corner tower is Roman and was previously partially uncovered in excavations that took place on site in the 1930s.
Posted by David Petts at 02:30 No comments: 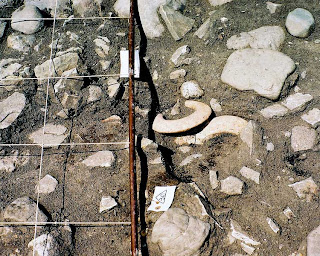 You can find lots of new images of the 2009 excavation season at Binchester at the website of Professor Michael Shanks (Stanford University). This includes some great pictures of the dig and the excavation team, images from the various fieldtrips we made with the Stanford students and even some shots of the end of dig party! Plans are now underway for the new season this summer!
Posted by David Petts at 04:22 1 comment: