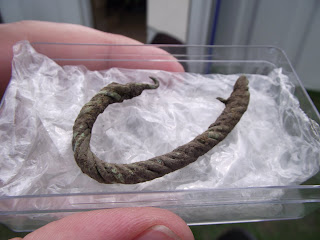 It's great having lots of people on site, we're really making progress. In Trench 1, the dismantling of the cobble surfaces at the southern end of the barracks continues, as does cleaning and picking away at the interior of the medieval structure. I should have mentioned yesterday that this has resulted in the discovery of a nice copper alloy mount of probable medieval date. We've now got at least three teams of people working on the edge of the rampart now, exposing the clay of the rampart bank and picking up a number of interesting features abutting this feature. On the rest of the Trench, there is some planning going on but its mainly back excavating the pits and hollows, including the 'big pit'!.

In Trench 2, nearly all the balks across the road are out now and work is carrying on apace along the street frontage removing the remaining bits of late rubble. Some planning has been completed, finishing off the odds and sods left over from the Durham students. Finds of the day- nice Roman bracelet- see picture!
Posted by David Petts at 09:32