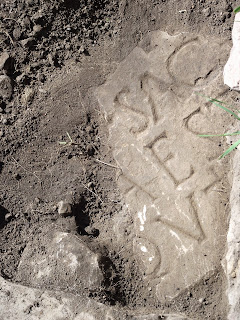 Its been quite a day on site. We've managed to avoid the worst of the weather (apart from a brief shower in late morning), this has allowed us to steam ahead with work in both trenches. I'll fill you in more on the details of this tomorrow. However, we've also had one of our best discoveries from site so far, a fragment of Roman inscription. Inevitably we found this shortly before the end of the day, so we're still working on it, but it's clearly part of a more extensive text; we'll work on the possible translation as soon as possible. It came from Trench 2 and appears to have been re-used in a later (probably post-Roman) surface. It's a great reminder of the extent to which even here in the north of England, we are dealing with a society which placed great emphasis on literacy. As such it contrasts wonderfully with another find made today, a fragment of terra sigillata with incised graffiti 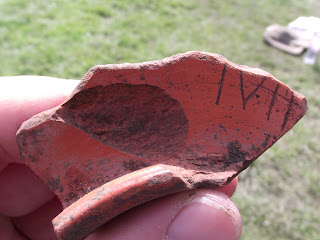 This comes from the other end of the spectrum as far as literacy is concerned. It is small-scale and ephemeral compared with the monumental nature of the inscription, but a nice indicator of the different ways in which texts might be deployed in Roman Binchester - we can also add to the mix a small iron stylus we found yesterday (our second from the site so far). 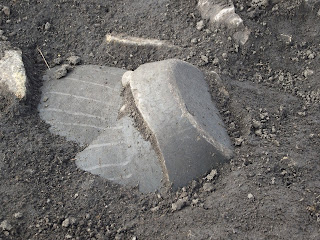 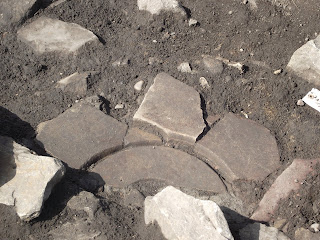