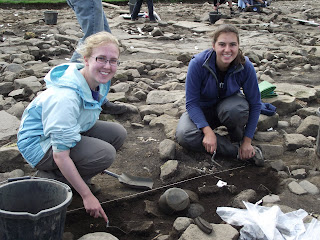 A far better day today- even saw some blue sky. This meant things were back to normal with a full crew on site. In Trench 1, people were continue to pick away at the interior of the medieval building, although much of the rubble appears to be beneath the gable end. Along the eastern side of the site there was a large group cleaning some of the remaining areas of cobbles. Hilly is still in the big pit, but rather than going deeper she was exploring the relationship between the ditch a possible contemporary gully adjacent to it (and thanks to Hilly's mum for some good cake). Elsewhere there was more planning and recording, with the interior floors in the northern compartment of the barrack looking good; there are at least two phases of surface, with a rough cobble floor overlying a more substantial flagstone floor. In the pits to the west of the barrack, more poking around, which revealed a rather nice, almost complete grey ware pot placed in the edge of the pit immediately adjacent to the barrack wall.

In Trench 2, more work on the street frontage, mainly recording what was uncovered yesterday. The roadside ditch is now looking quite substantial in places. Along the northern edge of the site, to the north of the right-hand side strip building, Dan has beem working on one of the stone-lined pits, revealing yet more limestone on a surface abutting the northern gable end of the structure (or where it would be if it hadn't been robbed out and then knackered by the west-east ditch. In the central open area, there are hints of a new stone wall appearing - will this herald a new building? Difficult to tell at this stage, we shall wait and see. We're still working in the large pits as well- revealing new stone linings in places. SOme nice finds from this trench today, some pleasing ceramics (we lifted a large almost intact grey-ware pot that had been sitting on the surface in the open area) and there was a nice piece of worked bone. It may be a decorative inlay although there are two notches at one end and six at the other (see picture below)- any ideas? 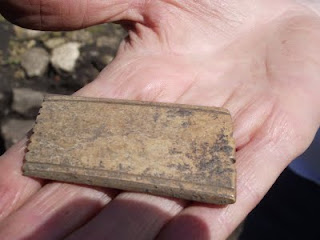