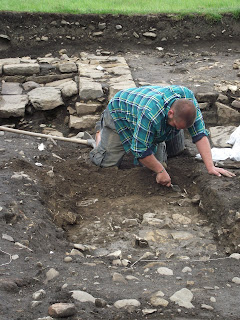 More sunshine and showers - had to down tools for a while before lunch, but otherwise a good day's work. Over the last two days the biggest progress in Trench 1 has been along the east rampart. We've been able to identify a number of cut features intruding into the clay make-up of the main rampart bank, as well as evidence that at least one of the gullies cut into the bank. We've also started clear around one of the probable ovens inserted into the rampart. Meanwhile there has also been lots of progress around the small, medieval building and the area that lies between it and the main structure. It is possible that the smaller building may actually be abutting a revetted stone area, which may have marked the edge of a marked rise in the topography to the area just south of our trench. Further picking away of the stones inside the building has revealed what appears to be a better candidate for the original south wall of the structure. The stone above it does look like it might be running into the revetted stone area to the south-east. Also in Trench 1, more work on the pits (of all sizes!) and a return to an old favourite, the stone lined pit inside the main building which is integrated with the flagstone floor. As so many of the other pits have had multiple stone linings, we've gone back to see if this one also has several layers of stone within it.

In Trench 2, all is back to normal after the excitement of finding the inscription. We've made great progress in a number of areas. For example, we've got far better definition of the south frontage of the western strip building, including two socket stones, which were presumably intended to support a veranda. There are also two other possible socket stones on the same alignment further east along Dere Street. Elsewhere, we are having a really good poke around to identify the edges of possible robber trenches which appear to have removed a number of stretches of walls from both strip buildings. Further along the egde of the road, there are more large flagstones appearing from beneath patches of rubble. Time for a little planning tomorrow, and hopefully we'll get the inscription out of the ground

Post-script
I normally don't mix my own work with this blog, but for those of you interested in the impact of the current financial and social situation on the protection of archaeology in the UK and other aspects of the historic environment might want to have a look at something I've written on my personal blog. These are my personal thoughts, but may give an insight into the world of archaeology outside the relatively rarefied world of a university research excavation.
Posted by David Petts at 09:45