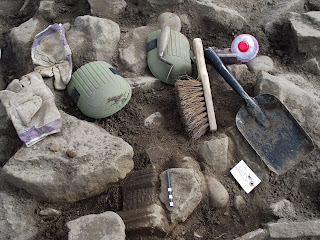 Despite a busy weekend which involved the joys of the Durham Miner's Gala on Saturday and a visit to Hadrian's Wall (Steel Rigg; Housesteads; Vindolanda) on Sunday, everyone was raring to go this morning. Unusually our find of the day came very early on when Ashley found a small stone household altar in an area of rubble in Trench 2. This may have an inscription on, but it is very eroded and will need closer examination to decrypt it. Other developments in Trench 2 included the discovery of yet another stone socket stone. These big stone socket stones are clearly designed to support large squared timbers. There are also a number of smaller socket stones (mentioned previously), which appear to have supported smaller wooden stakes. Jamie has mentioned that he's seen similar examples in Carlisle, and I've just come across a reference to other similar stones from the late Roman barracks at Halton Chesters. 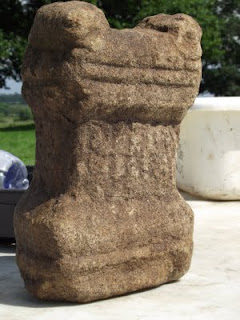 In Trench 1, the major progress has been on the rampart, where our merry digging crews have revealed further walling. This appears to suggest that much of the rear wall of the rampart was supported by a stone revetment. Otherwise, in this area it was onwards and downwards with our exciting range of pits and further unpicking of cobbled surfaces in the south of the trench
Posted by David Petts at 12:46