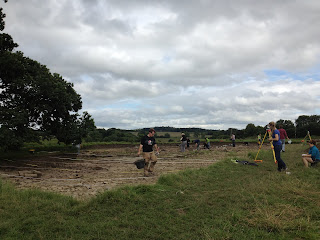 Today's blog post is from Julia Hurley Today’s lovely (though windy!) weather allowed us to make considerable progress on the site. We began the morning with a tour of Trench 2, during which Peter told us about some new interpretations of some of the larger areas in the trench, particularly the area between the bath house and Dere Street. Several stones with post holes indicate that a later wooden structure was built onto the front of the building, which provides a possible explanation for the gap of several meters between the baths and the road. After our tour, work commenced in the trenches. Extensive planning and leveling was carried out in the west section of Trench 2. Elizabeth and Carol worked to reveal cobbles in the central room of the bath house, which led Jamie to draw an interesting connection to similar cobbles that Katie and I discovered on the north edge of the trench. Perhaps they date from the same period? Excitingly, Jamie also believes that there may be another building coming up in the middle of Trench 2. With any luck, we’ll find out before the end of the week. There were several interesting finds in Trench 2, including an amazingly well-preserved set of tweezers found by Linda. Over in Trench 1, although Matt reports that there are “still no swords” to be found, there were several interesting finds. The team excavated the top of a Roman glass bottle, in addition to a well-preserved pot. 6 coins were also found in Trench 1 today, but unfortunately they were from the spoil heap! The Trench 1 team also made good headway on revealing the Roman intervallum road. In the southwest corner of the trench, a new cobbled surface has been uncovered. The absence of cobbles in the middle suggests that there may have been a drain associated with this surface. All in all, it was a very productive day for the team at Binchester. 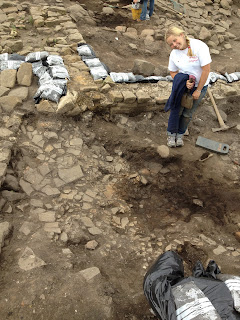 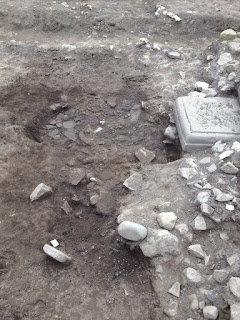 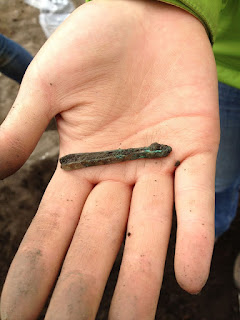