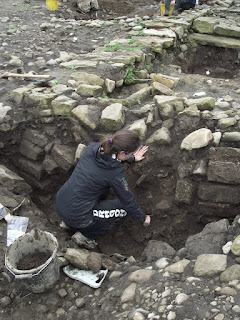 So two days worth of work to catch up on. In Trench 1, the most significant development is the realisation of the implications of our uncovering of most of the northern gable wall of the barrack. We can see clearly how the current top of the wall is a rough rebuild roughly along the line of the earlier wall. Crucially, we can now see how in this latest rebuild, the gable-end door was at the western end of the wall, but this replaced an earlier door in the eastern end of the wall, which has its lower lintel a good 50cm below the latest version. This is a really solid reminder of the extent to which the internal floor levels of the barrack must have progressively risen since its initial construction and how much the barrack has been remodelled. This is made even more clear by the westward extension of this earlier gable wall. This probably implies that the earliest phase of the barrack block was twice as wide as the building we can see at the moment. At some point before the later gable end wall was built this western half appears to have fallen entirely out of use leaving just the eastern half to continue as a standing building. Given that this eastern half itself was clearly extensively reworked over time, we are beginning to see a real time depth to this constantly changing building. Chronology is hazy, but it seems pretty clear that the western half had fallen out of use by the time the butchery/pit phase occurred. This phase was followed by a thorough reworking of the southern portion of the extant structure in the 13th/14th century, when elements of the barrack survived to such an extent that they could be incorporated, at least partially, into later buildings. Elsewhere in this trench, we've been finishing off the cobbles to the east of the barracks and the final elements of the medieval revetment feature. Hacking away at the embankment near the southern oven/kiln has revealed an extensive spread of charcoal which has clearly been raked out of the stoke-hole of this feature. This will give us potentially good burnt plant preservation and something for C14 dating. Finds today included a very large fe obj of indeterminate type and the top of cow skull with a distinct nail hole (not modern) in it. In Trench 2, we keep on going down within the interior of the bath building- a large charcoal-rich layer has been reached in the easternmost room. Otherwise, there is lots of planning going on, as well as attempts to get a look at the central area of the trench and to unpick the complicated western most section, where I must admit, I remain to be convinced about the presence of the building. Tomorrow is our last day! 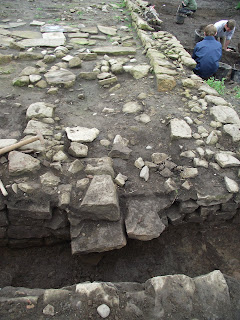 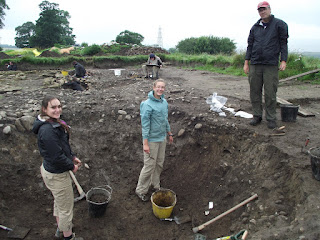 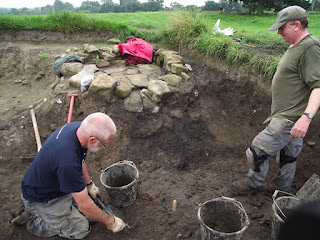 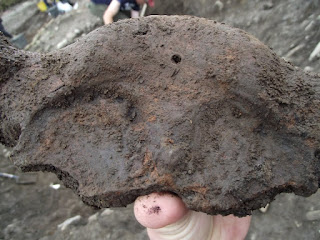