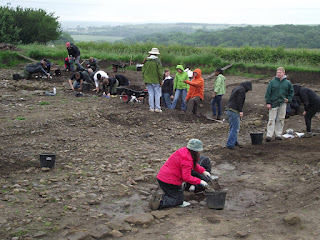 Well, we're back after our week's break. Lots and lots of new people on site today- from Texas Tech and other US universities, a group from the Fulbright Summer School, lots of local people and handful of Durham students. Overall we had about 75 people in the trenches today. After a useful introduction to the site by David Mason and a site tour we soon had everyone working. Most people were placed in Trench 1,so lots of work took place here. Mainly we had people picking away through the cobbles in the road surface. Others were planning some of the southern parts of the barrack so we can start removing some of the flagstones. Along the south-east rampart we had someone starting to examine one of the small features built into whilst elsewhere we were still trowelling away to define its precise edge. In 'Hilly's Pit' we removed large quantities of the stone lining and started chipping away at the edge behind these stones. Nearby, Ellen and Rosie started looking at the gully next to Hilly's pit and Ellen has picked up what maybe part of the tower wall. Lots of cleaning taking place along the north-eastern rampart - Janet found a nice circular brooch (see image). It needs cleaning and is probably Roman, but I must confess I sneakily hope it might be an Anglo-Saxon disc brooch. Lots more bone, including a nice cow scapula which Cameron identified as having a slot through it, indicating it had been suspended or hung. Over in Trench 2 the work was focused on two areas. First, lots of trowelling at the eastern end of the trench to try and locate the roadside ditch which was such an important feature further west. Pleasingly, towards the end of the day, the diggers started to recognize what looks like some cap-stones for the ditch. There was also lots of stone removal in the central section. Pleasingly, as they took away the cobbles, there was just earth beneath rather than yet more layers of stone. Nicest find from this trench today - a silver Roman coin in excellent condition. 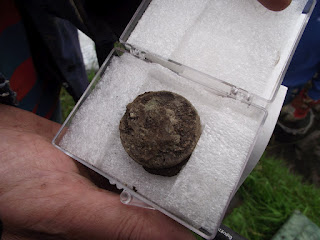 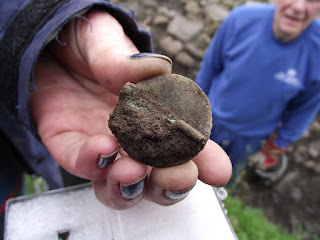 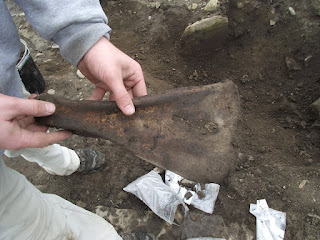