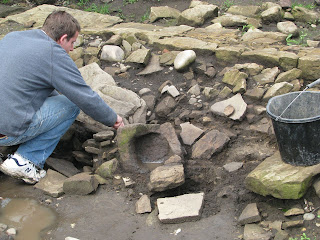 Today's blog post is from Brad Morrison Our morning mist turned to rain after just a couple hours of work. After calling an early break for tea the team began to clean the ceramic building material we’ve managed to pull up over the last little while. An imprinted stamp was found on what appears to be a roofing tile, which may be helpful in providing a date of its manufacture and later use at Binchester. The rain gradually let up as the day progressed, and small numbers of team members were put back to work in the trenches. In Trench 1, the excavators turned more to intensified mapping of the periphery of the site so as not to create a muddy quagmire with their trowels. A small group continued some work in making sense of the new trench extension, but we’ll have to let the rain subside before we can get a clearer picture. The small team working in Trench 2 pressed on with pulling back a lot of the dark material in the centre of the site. We’re exposing a lot of cobbles and what might turn out to be a wall running north to south, but again only time will tell if our suspicions are correct. In the north-west section of the trench, Daniel has diligently uncovered a rather interesting small square stone basin. Nearby in the north-central area, Callie hit upon a flagstone while mattocking. It appears as if the stone has a purposefully bevelled edge and may have served any number of uses. Perhaps it was simply molding design incorporated into one of the nearby structures? Altogether, we managed to squeeze out a rather productive day considering the amount of rain dumped on us. The forecast tomorrow looks quite grim, so it may be the case that our expert skill at finds cleaning is put to the test again. With luck we’ll catch dry spells and get on with excavating again. Fingers crossed! 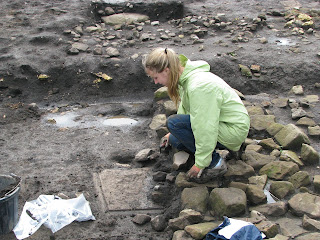 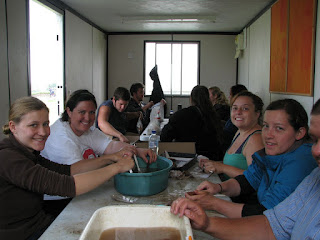