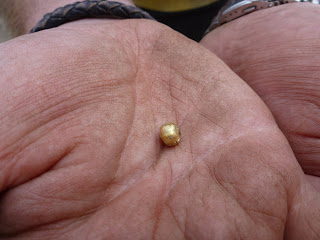 And thanks to Sam Beger for today's entry The Northern English drought continued its streak today: 6 days without rain on site. We felt like ants through a magnified glass as the sun beamed down on the arid trenches, but being the professionals that we are, we carried on. It seems that the tanning pit hypothesis may have been correct for today as our pasty complexions began to generate pigment. Despite the compact soil, numerous artifacts were uncovered today. Jonathan earned a new nickname of "Jonathan Trowel Hands" due to his systematic and almost machine-like ability to find artifacts. Today he found an amazing golden bead (the only gold object this year) as well as a spearhead. Other finds in trench 1 were Will's clay game counter, and Brad's blue glass bead. Over in trench 2, Madison found a portion of a jet ring and Lauren found a small coin. Some new and exciting things that were discovered today included the removal of some behemoth stones. Tim and Melissa flipped over some flat stones in their area hoping to see some inscriptions on the back. Although there were no signs of any epigraphs, the removal of the stones allows for the area beneath them to be excavated. Over in Daniel's part of his trench, another group of large stones was removed and hurled into the rock pile. Also in trench 2, Katie and Madison managed to uncover a beautiful extension of a pathway, giving us some new valuable information about the vicus. Overall today was full of great weather and fun. There was a lot of recording on the Total Station for both small finds and surveying continued in both trenches. Becca's final thoughts on the day were summed up as, "Today has been awesome." Only 3 days left and our goal is to continue efforts to remove all medieval deposits and structures by the end of the season. The challenge strikes a remarkable resemblance to the TV show "Time Team". Will we make it? Stay tuned! 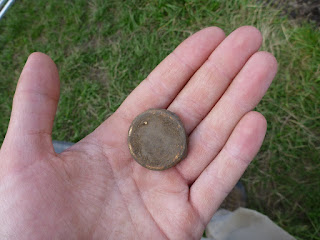 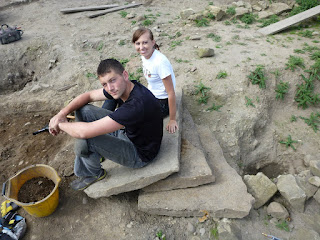