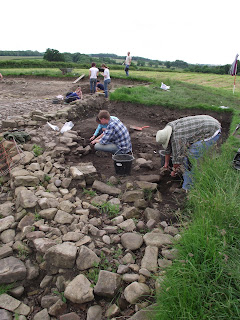 Another great day- lots of people, lots of work. In Trench 1, the small extension to the trench we put in this season which has proved so problematic has now resolved itself into a substantial wall, probably of medieval date. It joins the south-east corner of the now absent medieval building and may be somehow relate, although I doubt it is another structure. Nearby there was work going on dismantling the probably medieval features on top of the barrack block. Along the se side of the embankment there was good work unpicking the drain feature, traces of which may also be starting to emerge on the ne side too in the area where there has been lots of cleaning back. Other activity in this trench includes unpicking features along the outside of the barrack, including an area with very heavy iron staining- perhaps evidence for industrial activity. Also, lots of the inevitable planning In Trench 2, the roadside ditch was becoming increasingly clear, while the central area was completely cleaned and photographed - something to get stuck into tomorrow. Towards the end of the day Jamie moved a group over to the far north-west corner of the trench (near where the inscription was found last year) and got them to start giving it a good clean back to see if anything interesting emerged. Meanwhile, in the bath building, poking around in the base of one of the large internal pits has revealed what look like more flagstones. Once these areas are fully cleared and planned, then we can start unpicking them. It wasn't all excavation work though. One of my Masters students was on site interviewing visitors and workers as part of her research on perceptions of Binchester. This theme was followed up this evening when a number of us (myself, Peter Carne, Michael Shanks, David Mason and David Mien) participated in an oral history project event when we were recorded talking about our involvement with Binchester, and reflecting on our experiences of this project. All organised by Bianca Carpeneti, a former Stanford student, now at Cambridge, who has spent several seasons on the site with us. 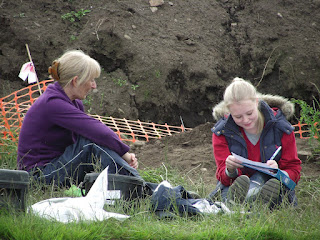 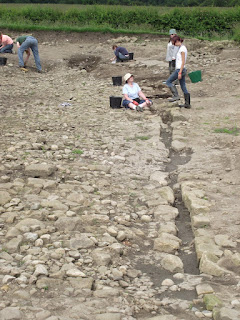