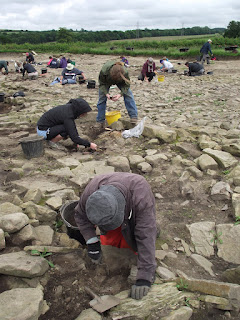 After a wet Friday and a busy weekend, including a trip for the US students up to Hadrian’s Wall, it was back to work with a vengeance this morning. The site had largely dried out and we had an excellent turnout (over 70 people out today). After the usual introductory site tours we soon had everyone hard at work. In Trench 1 lots of cobbles were coming off along the roadway to reveal further cobbles. Nonetheless, it is clear real progress is being made; we’ve a group working removing a layer of stones which lay between two lines of stone that run at right angles from the drainage gully – we’re not quite sure of the purpose of these lines. They are clearly not structural; possibly Roman ‘sleeping policemen’? In general, it seems that the lower layers of stone in this area are smaller than those above, a number of more sandy patches have also appeared. Further north, as Hilly’s pit is becoming even more complicated, we are half-sectioning the remaining fills, whilst we plan the rest of it. Along the western side of the barrack we are doing large-scale removal of some of the big dark layers, which are mercifully absent of pits and surfaces. We are also returning to the interior of the barrack; cleaning and picking out stone surfaces. In a number of places where later cut features intrude downward we can see earlier layers including a nice clay surface peaking out from later deposits. In Trench 2 there has also been great progress. Daniel is making great progress on the flue + oven in Building 1, whilst we are also picking away at the oven in Building 2. We are also cracking through the big dark layers between Building 2 and the Bath Building. Most pleasingly, in the area in front (to the south) of the bath building we’ve found two more walls running between the current building and the road. Not quite clear of the phasing yet; do they indicate a later reconfiguring of the access to the main building? In general, finds are plentiful, including a nice copper alloy ring from Trench 2. Incidentall, at Housesteads I saw a fragment of a slate plaque similar to the one we found the other day here at Binchester. It was described as palette for grinding make up or medicines, which is interesting as it came from the barrack area rather than the vicus. 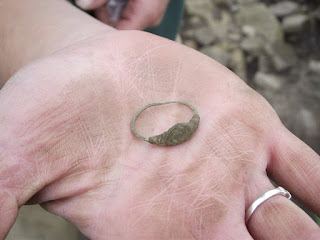 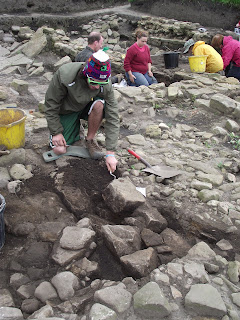 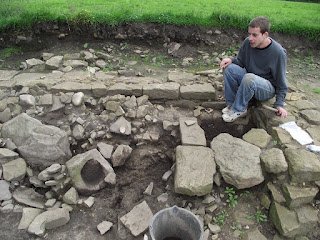 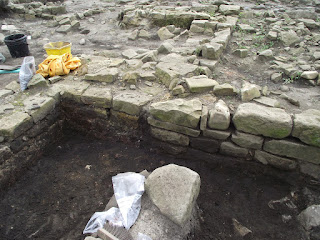