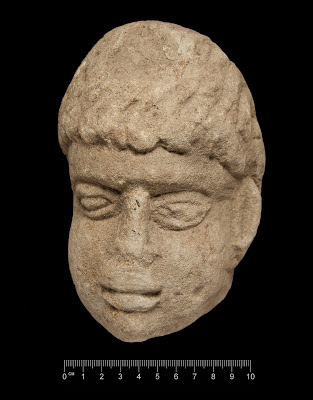 Many of you may have found your way to this blog as a result of the press coverage we've received about our recent discovery of a carved stone head of an unknown Roman god at Binchester. Inevitably in the various interviews we've done, David Mason and myself have not been able to go into much depth about the find, so I'd thought I'd try and summarise the current state of knowledge about it. The head, which is made of sandstone, was found in a dump of late Roman refuse that had been thrown into one of the rooms of a probable bath-house in the civilian settlement that lies outside the Roman fort at Binchester. This building was terraced into the hillside and all the rooms we've looked at have been filled with massive deposits consisting mainly of alternate layers of butchery waste and rough stone surfaces. These dumps are around 6' in depth. The head was part of one of these stone layers and as such is clearly not in its original context. However, there is reason to belief that it may have originated from this general area. A couple of years ago we found part of an inscription nearby that appears to record the dedication of a small shrine by the commander of the cavalry regiment based at the fort. In the same sequence of late Roman dumping we also found a small Roman altar, and earlier this week we found a fragment of a pot with an applique pottery wheel on it that may have ritual connections to the cult of the Romano-Celtic 'wheel god' perhaps best known from the north of England in his guise as Taranis. This all suggests some ritual activity in the immediate area or more likely within the bathhouse itself. However, at some point, probably by the 4th century, the bath and shrine had fallen out of use and the head ended up incorporated into these waste deposits. The head itself is sandstone and reasonably well carved although not of the highest order of Roman sculpture. This can be seen clearly when compared with its closest parallel, the head of Antenociticus from the Roman fort at Benwell on Hadrian's Wall. The Benwell head is clearly more proficiently carved, but both share the similar hair style and lentoid eyes, although the eyes from the Binchester eyes are far more 'googly'! The Benwell head is also clearly part of a larger statue; parts of the neck survive showing it had been detached from its torso. However, the Binchester head has no neck and no sign of a scar in this area. Instead, it seems to have always been intended to simply be a detached head and its flat base means it sits easily on flat surfaces. A number of people have suggested that it has an African appearance, primarily because of the modelling of the nose and mouth. The lips are certainly fuller than the fairly tight lips of the Antenociticus head. However, it is difficult to be certain how far this was an intentional decision aimed at depicting ethnicity. It is also worth noting that the nose and mouth appear to have been slightly damaged in antiquity, flattening them off slightly. We have canvassed the opinions of various experts opinion has been pretty evenly split. So, do we know who this god was? No - despite the broad similarities with the Antenociticus head, I don't think we can say that the Binchester head is meant to represent him. Nonetheless, they are both clearly drawing on the same broad artistic repertoire that combines both classical and more indigenous Romano-British artistic styles. I am fairly happy that it is meant to represent a local god - although the depictions of local gods in Roman Britain were often conflated or paired with better known Classical deities. As such it is rather fitting that we found the head in the civilian settlement, one of the key arenas in which the Roman Empire through its army and administrators would have come face to face with the native people of Northern England. 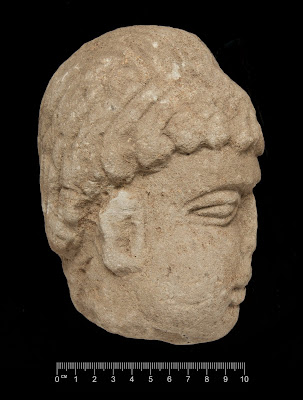 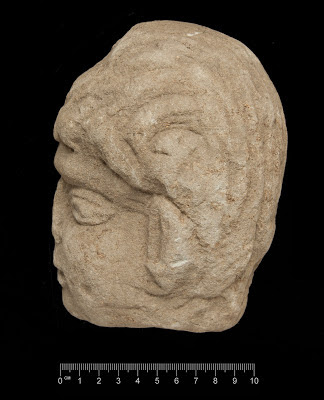 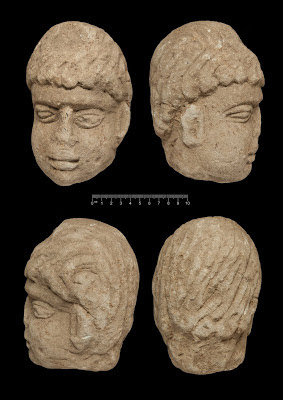