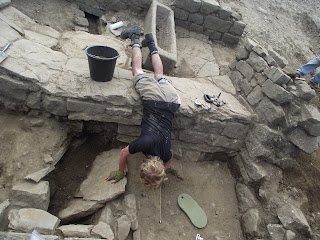 With a little over a week left, we've still got a lot to do on site. In Trench 1, yet more of our newly defined north-south wall is emerging to the west of the main barrack block, although we still haven't cleaned its full length. In the southern end of the barrack we are cracking on cleaning the interior floors. One large stone uncovered has what appear to be sketchy scatches or doodles incised onto it. In the northern compartment, we've also seen more of the nice cobbled layer in the 'stable' area emerging. This is a slightly odd feature as the cobbles look unsuitable for a horse to have stood on, although they are very well laid. In the eastern half of the same area there is just a clay floor. The walls of this compartment continue to prove complicated. There is a short stretch of the northern wall which has seemingly partially collapsed at some point, although it is not clear whether this was caused by the adjacent large pit, or whether the pit took advantage of the area of subsidence caused by the damaged wall. Whichever is correct, the gable wall was partially (and poorly) rebuilt. Keith is beginning to dismantle the later rebuild to give us a clearer understanding of the sequence of events here. Just to the north-east, Tom has continued in the latrine. I'm wondering whether the seeming subsidence within this structure was caused by the filling in of a latrine trench and that originally this building had two sets of seats facing each other. Incidentally, we've found another possible fragment of toilet seat in this area. In the adjacent tower, the location of Ken Steer's trench has been more clearly defined and a area of stone tumble has been photographed and removed.

In Trench 2, Rachael and Steve have continued the final cleaning up of the northern section of the corridor for photos. The results are impressive. To their south, the latest surface has been planned so more can come out now. In the main room, the large section through the dump has continued to remove the friable ashy/charcoal rich layer, which has significant levels of bone in it. To the south, the roadside gully has been further defined although it has hard to see how it will match up with the other stretch of gully we'd previously uncovered unless it takes a real kink to the north.

I meant to mention earlier that in the first half of this year's season we'd found a fragment of carved stone seemingly shaped like a semi-circular boss. Jamie has flagged up it looked like a bit of early medieval sculpture, but I must admit I thought there would probably be a Roman parallel out there. However, having now shown it to both Roman sculpture people and early medieval people it is looking pretty likely to be a fragment of an early medieval sculpture- possibly a central boss from a late Anglo-Saxon cross. This is exciting and raises lots of question (not least of which is, where is the rest of the cross?). It comes from an area of site well away from the known 8th century Anglo-Saxon cemetery, which was in the vicinity of the current Binchester Hall. Instead it came from a pile of stone rubble on the edge of Dere Street in the vicus. Was it a roadside cross? If so, it wouldn't be the only one known from Dere Street with the Legs Cross standing close to the Roman road at Bolam (between Binchester and Piercebridge) where it probably marked the boundary of the large Anglo-Saxon estate granted to the known monastery at Gainford. 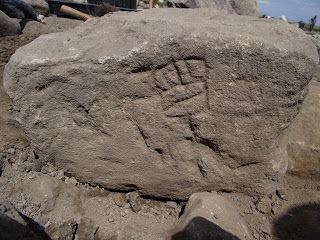 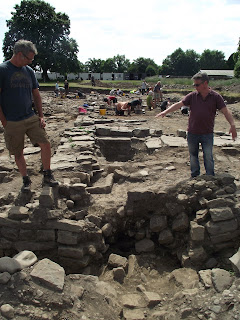 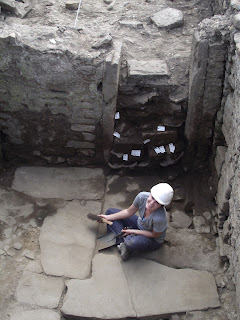 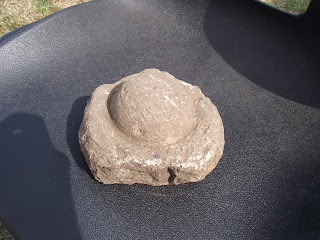