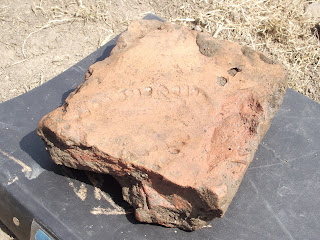 Yesterday we took all our US group up to Hadrian's Wall to explore the Roman archaeology of our area- including a good nosey around Vindolanda and Housesteads. We do this every year and each time I find myself looking at something different and comparing it with what we have at Binchester - this time it was the latrines at Housesteads. Obviously the Housestead bogs are much more substantial and with an impressive system of gullies sending water through and around them, directing the flow from the aqueduct which brought water in to the top of the fort and flowed down the hill towards the latrines at the bottom of the slope. Whilst our Binchester netty is much smaller, and in many ways not particularly comparable, the visit did kick us to do something we'd been meaning to do for ages; step back our trench to catch the inner face of the fort wall so we can capture the entire latrine structure and not just the section we've uncovered so far. Even taking it just one metre back is still a big job, and given today's heat not an easy one. Nonetheless, Chris, Quentin and the others made a great start and we can now trace the internal face of the wall across our corner tower and into the edge of the latrine structure. In the adjacent tower area we also made great progress in exposing the wall here and now have several courses visible. Elsewhere in Trench 1, we've found at least one more west-east wall that seems to run from the western wall of the barrack all the way to the new eastern wall. It is good to be uncovering more of this structure- it makes it more complicated, but this is a good thing! We also saw lots of investment in time along the area between the west baulk and the west wall of the barrack. One surprise discovery was a possible baby burial placed close against the foundation of the barrack wall. I've seen plenty of human burials in my time in archaeology and previously never been that affected on a personal level, but now I have kids of my own I was surprised how uncomfortable it made me. In another equally personal insight into the people who lived at Binchester we found a Roman tile with a boot print in it- you could see the hobnails very clearly! Over in Trench 2, another day of planning and recording- particularly in the main bath-house although Maurice and the others continued to work away at the remaining baulk that still stands in the northern compartment of the corridor. The southern section of the corridor was being recorded, and the springers of the arch are now looking good. Outside the bath-house, the process of deconstructing the latest phase of the post-pad building has begun, whilst others continue to clear back the area to the west. This is the last from me for a few days- I'll be off site until Friday due to other obligations. However, other members of the team will be posting in my absence! 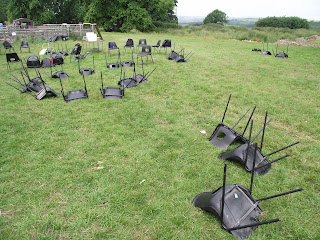 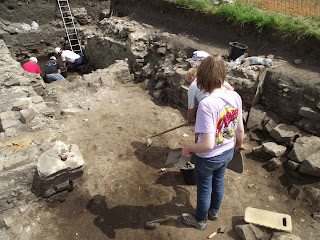 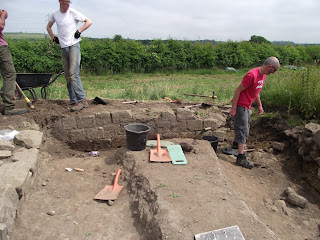 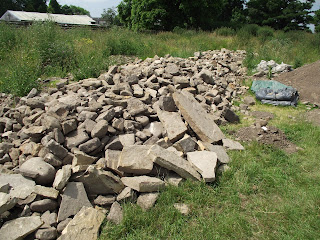 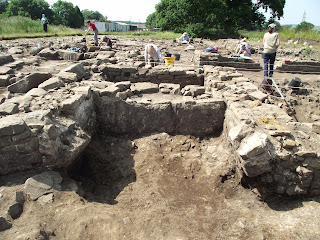 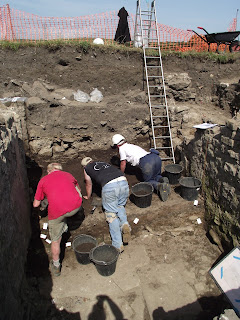 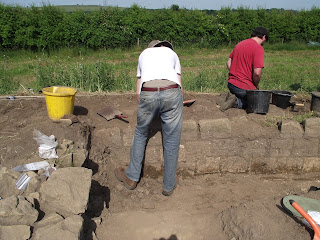