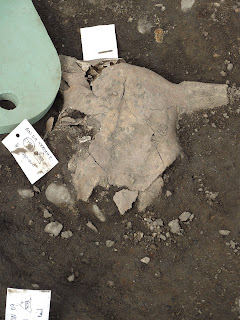 A hectic morning, as we had lots of press visits following a press release about the carved stone head (I'll do a separate blog entry about that shortly). When we finally got going, progress was rapid. In Trench 1, we've begun the great assault on the area to the west of the barrack block. This long strip between the building and the trench edge has not really been touched this year. In the past, we've found a series of hollows and pits containing butchery debris cut into this area. However, we're now trying to move the matrix into which these features were inserted. Inevitably more features are already showing, including what looks like a large charcoal rich pit at the north end (for once, seemingly lacking a stone lining!). We're also working away vigorously in the area to the east of the main block. Although there is a lot of fairly heterogeneous surfaces and cobbles we've started to reveal at least one substantial flagstone floor here. At the north end of the barrack, we've seen more work going on to define the wall underlying the barrack- it's coming up very nicely. In the far north-west corner of the trench Rachael has begun to reveal what looks like another bread oven. We'd been assuming it was an interval tower as it has a small stretch of walling, but it looks like this may have been a superstructure for the oven (which is seemingly less well preserved than the one in the eastern rampart). Meanwhile, work continues in the big pit.... In Trench 2, we've been expanding the trench in the north-east corner - nothing drastic, just a fractional cutting back to improve access to this, our deepest area on site. In the southern compartment of the corridor, all the stones have been cleared revealing a nice seemingly clean brown soil. Will we find yet more stone layers beneath this? Almost certainly. The post-pad house is looking nice and clean- some recording going on- deconstruction will start soon. In the area to the east we've some nice surfaces coming up, but seemingly nothing structural yet. 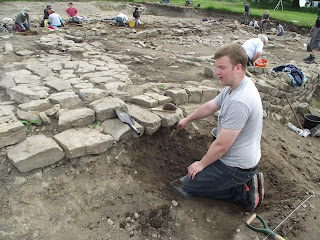 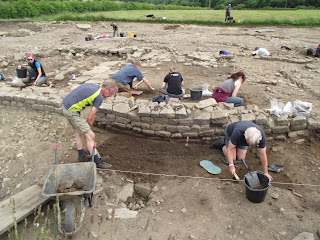 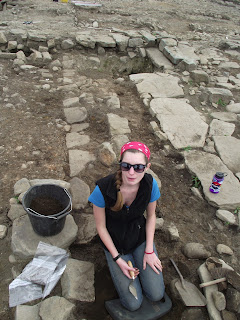 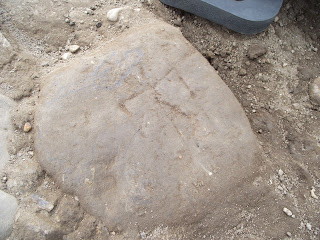 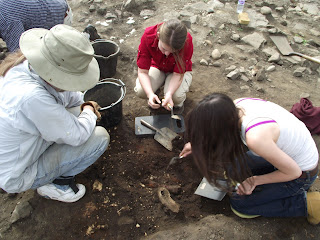 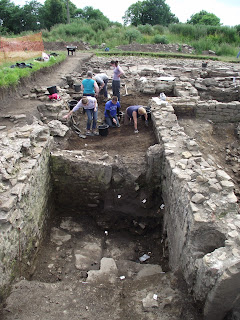 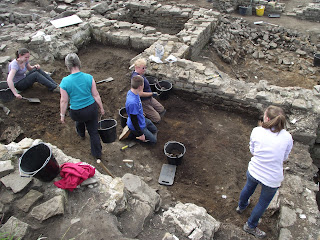 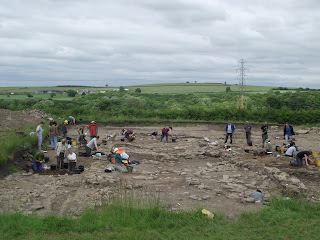