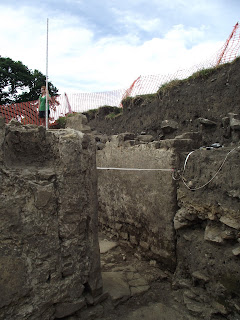 Apologies for the delay in getting this final page up. I've been slowly catching up with real life post-Binchester. The final day was basically last minute recording and a couple of site tours, so I'll try and give a brief overview of the season's progress.

To start with, we've been fantastically lucky with the weather. No time at all lost to rain, which after last year's washout is something of a miracle. Partly as a result of this and partly due to the levels we are now encountering, I think it is fair to say we have had our best ever season.

In Trench 1, the major development was the discovery of a major new north-south wall running parallel to and east of the existing barrack block. It is now clear that this was part of an earlier phase of barrack. Whilst we are still unpicking the structural implications our current hypothesis is that the original structure consisted of this new wall and our existing west wall; together they formed a large rectangular building. We have a number of west-east dividing walls and what are now appearing to be some crude drains for horse pee and a number of small paved 'corridors' running west east. Presumably there was another north-south dividing wall splitting this large structure into two ranges. It is possible that this runs beneath the north-south wall of our later building, although it is possible it may simply have been a wooden division. This putative structure has good parallels with Roman infantry and auxiliary barracks from elsewhere on the Northern frontier. At a later date this larger structure appears to have contracted in size with the new north-south wall indicating a retraction of the eastern edge of the building. This probably took place in the 4th century. It is clear that we have a distinct compartment in the northern part of the building forming probable quarters for a Decurion. This was divided into a living area and a stable section. This appears to be slightly detached from the structure to the south. This southern area has substantial spreads of flagstone paving and a number of hearths.

We have now more or less completely excavated our series of pits and hollows that contained lots of animal bone that surrounded the building. One major development this year has been the clear confirmation that most, if not all, of these are caused by major incidents of subsidence, presumably into major pits belonging to the earliest phase of the fort. This subsidence can be seen most clearly in the gully running along the normal gable edge of the barrack where four courses of the gully simply dip down and up again. In the area to the west of the barrack we have hints of another north-south wall although badly damaged in places. There are also a number of areas of indeterminate 'activity' including charcoal spreads, stone lined features, cobble surfaces etc. It is still unclear though whether this area was an open alleyway that ran parallel to the barrack or was actually an internal area forming part of a back-to-back barrack structure.

Outside the barrack, we've seen other major developments in Trench 1. One key advance has been the final bottoming of the 'big pit'. In conclusion, we think this was probably a... big pit. Still not clear as to its function - possibly a water hole, although there is no real indication of well lining, although there are hints of some kind of limited wood lining towards its base. This pit (or at least its final stages) cut the junction of the north and eastern walls of the earlier phase of barrack -perhaps this stimulated the contraction in barrack size? To the north of this pit is one of our more visually impressive discoveries this year - a latrine. It sits exactly where we would expect, hard up against the external wall (which for the first time we've actually exposed some of). This stone walled structure had a large flagstone floor and at least one trench over which the toilet seats would have been located. Based on the size, this was probably a four- or five-holer! We had a number of stone troughs associated including one reused in one phase of the culvert lining. We also had a number of fragments of toilet seat! It is clear from looking at the culverts that there were a number of phases to this structure and that it is possible that at one point the floor level was raised. There is also a lot of slumping in the southern half of the structure - it is possible that there was also a latrine trench here that fell out of use. The culvert runs out of the fort through a nice archway in the external walls. It was connected to the internal intra-vallum road gulley which would have sluiced water through in wet weather. It is conceivable that water from the water hole was also fed through the latrine when the weather was dry

In Trench 2, the major development has of course been the realisation of the sheer scale of the structural remains belonging to our bath-house. Having cleared out the interior of the northern half of the corridor, we were shocked to realise that the walls were in fact 6'-7' high. There was a flagstone floor and the structure had clearly had several phases of internal plaster. The fully cleared area also had lots of iron nails or fitting embedded into the wall perhaps intended to hold up some kind of internal panelling. In the exposed plaster in the large room we also saw a number of doodles or scratches in the plasterwork although nothing we could clearly discern. In the large room we cleared a slot through the room, bringing it down to the same level as the corridor and showing that there were benches on at least two of the walls, perhaps indicating this was a changing-room. In general, it is apparent that this is a structurally complex building, with good evidence for internal phasing, including blocked doors and windows, room subdivision and new walls added. The southern 'porch' - itself a later addition- also had evidence for the springers for an arch (or vault?). Overall, this is an impressive structure and amongst a handful of the best preserved Roman structures from the northern frontier (or indeed Roman Britain) - this is probably because it was seemingly terraced partially into the hillside - perhaps to help better manage water flow. Equally important is the fact that in the 4th century, all three rooms were filled with a colossal phase of dumping, resulting in them being filled to the top of their walls with late Roman refuse deposits including substantial quantities of animal butchery remains. We are still not clear how long this dumping carried on for- we urgently need to sort out our C14 dating campaign.

To the south of the main bath-house are at least two phases of building lying between it and the roadside. An earlier phase of structure appears to have been defined on three sides by rectangular stones with holes drilled into them (giving them nickname 'park railing' stones) - similar stones are known from Chester. The side open to Dere Street remained seemingly open. There were a number of possible internal features associated with this including a possible water tank/cistern on the street front. This was overlain by a larger rectangular structure defined by massive post-pads. This was larger than the earlier building and had two north-south walls at the western end, either indicating it had two rooms or there was expansion/contraction at some point. This building was overlain by the upper layers of the dumping phase that filled the bath-house and spilled out onto the street.

Beyond this area, to the west, we did relatively little work. We've exposed the cobbled surface that run north from Dere Street, and there are arguably hints of further structural remains yet to be exposed. We've also done more work on the roadside ditch/gully- which is very wobbly!

So overall, fantastic progress. For the first time we are really seeing evidence for phasing and structural development rather than simply defining site plans. This year was officially the end of our planned initial five-year project. However, given our progress this year, we will have to come back. Keep posted for further details! It just remains to thank all those who have helped on this years work- Peter, Matt, Jamie, Janet, Becca, Andy, Richie and Ashley from Archaeological Services, all our Durham students, our US volunteers particularly from Texas Tech (flagging up Gary, Melissa, Chris and Michael in particular), David Mason from Durham County Council and all our many local volunteers and finally Adam Stanford from Aerial-Cam for his wonderful images - I'll be posting some of these soon!

See you all next year! 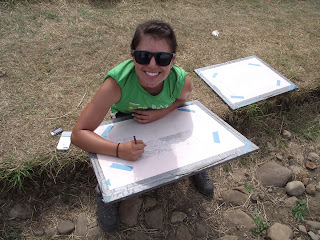 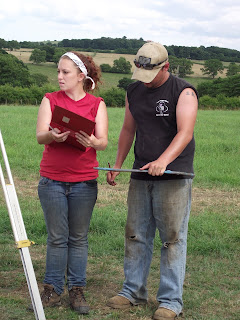 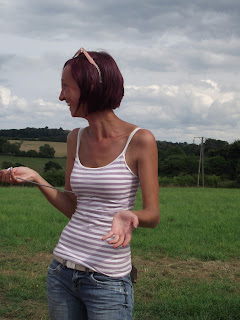 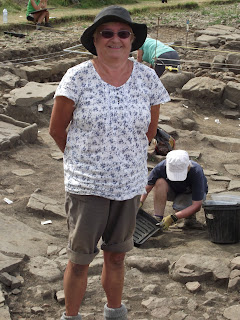 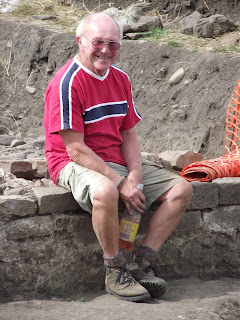 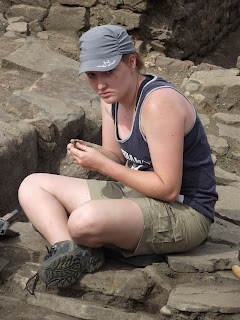 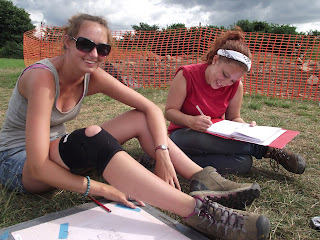 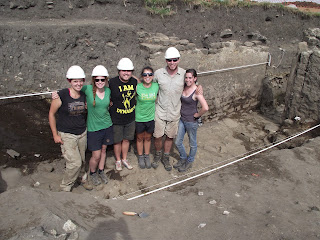 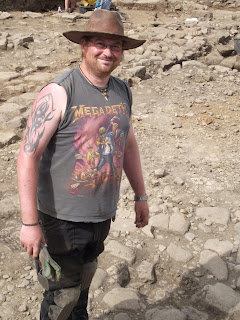 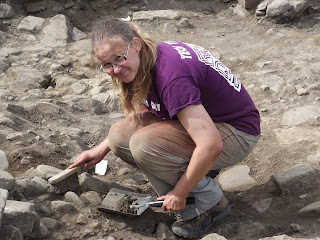 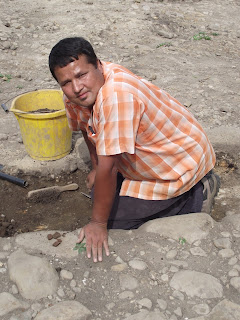 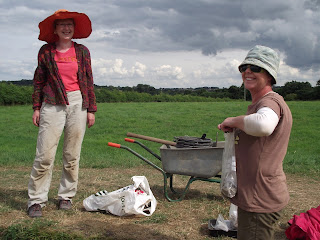 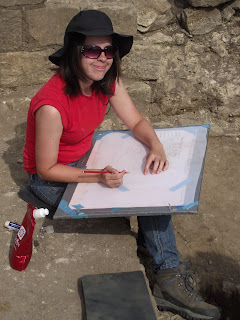 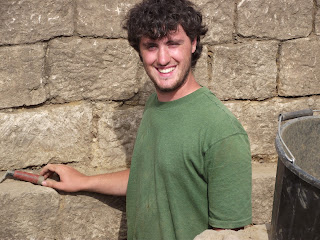 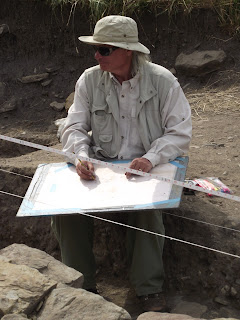 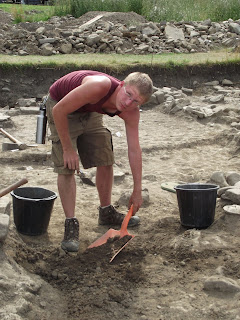