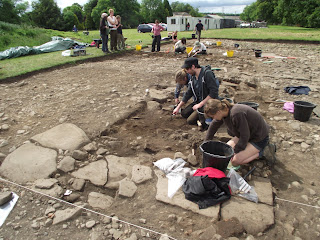 Another really constructive day today- we're making real progress already this season. In Trench 1, the most important development was the identification of a new stretch of wall that lies to the east of the barrack block. Pleasingly, this appears to line up with another stretch of wall which has emerged due to the weathering of a previously excavated area. This wall seems to run parallel to the existing structure. I just wonder whether we've actually got a second tier of rooms with the eastern wall of our current structure actually being a central spine wall to a much wider building. This would make our barrack much more like the kind of cavalry barracks known elsewhere on the wall, such as at Wallsend. It is possible that the western half survived better as it was subsequently re-used in the sub-Roman period, whereas the eastern section fell into disuse. This is still only a hypothesis, but it would explain why our barrack structure appeared so idiosyncratically narrow. Elsewhere in this trench, the big pit still looks like its bottoming out, but intriguingly, we may have another similar feature almost immediately adjacent it. We are also working hard to define the precise stratigraphy of the second, smaller building- does it lie over a patch of cobbles that might be a Roman road surface or are they just part of its foundations?

In Trench 2, the post-medieval ditch is all but completely excavated. This has revealed a number of pieces of wall in section. This, combined with the realisation that a large west-east aligned pit excavated last year was in fact a robber trench, has allowed us to confidentally identify a second strip building, lying just to the north of our existing one. It appears to house the large oven/kiln structure. We've also made great progress in locating the street frontage. We've more or less got the front of the strip buildings and areas of large flagstone paving, which is appearing from beneath later road surfaces. There are still lots of questions though; is there another building between our new strip building and the large structure at the north of the trench? - there appears to be enough room. Also, what is happening in the southern edge of our trench? - more structures or are we too close to the fort ditch?
Posted by David Petts at 14:26