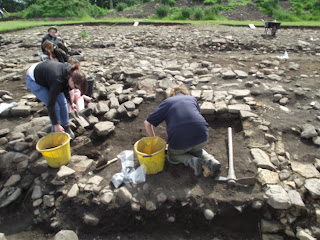 We have had lots of rain over the weekend, which has done wonders for the site, which was far too dry. In Trench 1, it was a fairly quiet day. Hilary finished recording the current stages of the big pit, and we're ready to make real movement with it tomorrow. Elsewhere, George and Hugh continued looking at one our stone-lined working hollows. The small building was photographed to allow us to continue the job of unpicking the associated cobbles and there was more clearing and cleaning in and around the south end of the barrack building. In Trench 2, things moved quickly, particularly around the big building at the east of the trench (dare I call it the 'bath' building?). Lots of progress on picking out more of the walls. The major development was in the areas of dark soil mentioned previously. In at least one case this appears to be the fill of yet another stone-lined pit/hollow. In the adjacent area, we've made quick progress removing the dark soil- for once we're able to get cracking with mattocks and shovels. It's one of the few large areas of deposit we've had so far that hasn't been full of stone and rock. Its dark colour suggests that it may have good organic preservation, so we'll ensure that we take plenty of samples. Leanne, Steph and Lizzie are busy on the area of the building to the east of the post-med ditch, carefully picking and cleaning around the interior walls. It's clear that multiple courses of stone wall survive. In general, it is becoming increasingly clear, that although we don't have the dense concentration of cobbled stone surfaces we saw in Trench 1, Trench 2 is producing a similar range of stone-lined pits/working areas associated with butchery debris. But what is the date?
Posted by David Petts at 13:54