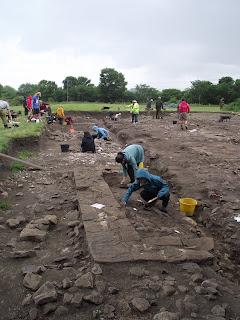 The first week on site finished with a downpour, not a bad thing as the site is dry. It was impressive how much the moisture made the contrasts in soil colour come through more clearly. Progress continues to be good. In Trench 1, the big pit looks like its going to have good organic preservation - indeed we had five plum stones out of it! We (ie Hilary and Mark) have taken it down to the level of the smaller clay pit and got it drawn and photographed. To the west of the barrack, we've more or less got everything to the same level. George is working on another of our shallow stone-lined pits whilst others have been finishing off at the south end of the building. We have now reached the stage where almost all of Trench 1 (except the small building) is at the same stratigraphic level- this means that we can look forward to some serious stone removal soon! We're already carefully unpicking the deposits of stone at the east end of the small building, with a focus on establishing the relationship between the building and the rubble bank. We're just wondering whether the wall at the east end of the building is actually the gable end; it's quite high, could it instead be related to a feature dug into the rampart? The final job in this trench has been working on the cobbles between the small building and the barrack where some other walls appear to be emerging (on some very odd alignments).

In Trench 2, the focus today was on the large eastern structure - David Mason has suggested it might be related to the nearby bath complex. Crucially across the site we now seem to have a layer of 'late' activity that is looking increasingly like what we've found in Trench 1 (ie shallow stone-lined pits/hollows) containing butchery remains. We also have what looks like two large dark areas (pits or dumps of material) in the large building- largely devoid of stones, is this a post-Roman dark earth?

Overall, looking at the last week, we've made real progress. Things are likely to slow down a little in the coming week as we have to focus on doing some planning and recording, nonetheless, we fully expect to continue at a rate of knots.
Posted by David Petts at 00:37