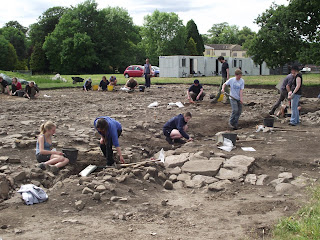 First day on site in season three (BIN11). We had around 55 Durham 1st year undergraduates out this morning for the first day of their three week field school. Unlike the previous two seasons, we had no new trench to open. This meant that we were able to get going immediately with some serious excavation. In Trench 1, we have a number of key tasks. First, we want to try and get a better understanding of how the shallow pits containing evidence for substantial butchery which lie on the west side of the main building relate to the cobbled surfaces on the other side. This means we are putting a lot of effort on to defining the pits (and other possible features) a bit more clearly. We are also finally trying to get a better sense of the chronology of our small rectangular building in the south east of the trench. This again involves trying to understand how it relates to the surrounding cobbles, so lots of careful removal of stones to look forward to. On the northern edge of the trench some students were working on the final vestiges of topsoil from the rampart, whilst work also continued in the large pit (still of uncertain date).

In Trench 2, the majority of work was focused in two areas. On Dere Street itself, we are removing a series of sections of road to try and located the underlying Roman street frontage, although we are also leaving substantial balks in place. We also allowed the students to get some experience in digging features removing the remaining fills from the unexcavated sections of the 18th century roadside ditch.

Already the finds are appearing; not surprisingly we've had plenty of bone and pot. We've also already got a number of coins, two small blue glass beads and a fragment of a jet or shale bracelet. All in all, a great start to the season (but lots to do over the coming weeks).
Posted by David Petts at 14:37