We are now heading towards the end of our second week on site. In Trench 1, there is activity happening in four main areas. In the space between the buildings we've unpicked more cobbles, almost certainly medieval as we found a long-cross penny (so probably 13th/14th century in date -see picture below). The new walls are more clearly defined, but still on resolutely peculiar alignments. We're now back exploring the area to the west of the barrack; we've uncovered a large pit immediately adjacent to an area of the barrack wall. This is different in character to our stone-lined pits - it's substantial (several metres across) and appears to have caused subsidence causing the wall to partially collapse outwards. Further northwards, we're clearing an area of stone that may be the partial remains of some stone-lined pits, although this is not certain. Elsewhere in the trench, the 'big pit' continues to go down! Finally, there are a few other stone lined pits being excavated- one inside the barrack structure. In Trench 2, the large pits within the eastern building have been further explored- they sit neatly within the rooms, implying that the foundations at least were in place when the pits were dug. From the limited processing of the environmental samples taken from them so far, there does appear to be good organic preservation. We are now at a stage where all the way along the northern edge of Trench 2 we have a series of stone-lined pits/hollows. These appear to get smaller and shallower as they get nearer the fort. This may be a real phenomenon or something to do with differential preservation. Several of them (as well as some in Trench 1) may have some kind of gully or channel leading to them. We really need to start thinking about the nature of these features. Although there is some variation in size, there are some linking features, particularly their stone-lining (often bedded in clay) and the frequent appearance of butchered animal bone. This bone superfically appears to consist mainly of cattle heads and feet, although we need more formal analysis to confirm this. One hypothesis we have is that they may be somehow linked to tanning; although we are having difficulty finding archaeological evidence for Roman or early medieval tanning that we can compare our features with. Of course, there may be other reasons for their construction- anyone out there have some ideas? 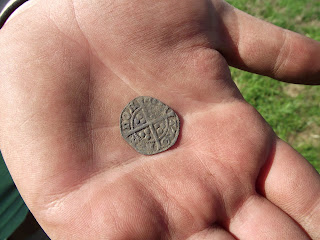