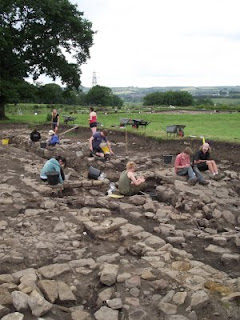 I was barely on site today due to lots of boring meetings, so thanks to Jamie for todays update: The rain held off so we got another full days work in. We bottomed the smaller stone-lined pit in Trench 2, which doesn't seem to be a contiguous stone surface but rather has a break across the middle which is quite intriguing - further work tomorrow will establish whether there is a real break or whether the stone lining forms some sort of trough at the base. We also started work on the robber trench on the eastern side of the western strip building, and kept on working on other stuff - nothing major really, just more planning, sections and recording.

The environmental processing has made an interesting discovery in the samples from the big pit in Trench 1 - when processed the sample produces a yellowy scum unlike anything from the other samples; the deposit is also quite greasy in places, which is leading to the idea that this may reflect the presence of animal fats (which could be a further link to tanning). Obviously this needs to be checked with further analysis such as looking at lipid content.
Posted by David Petts at 13:06