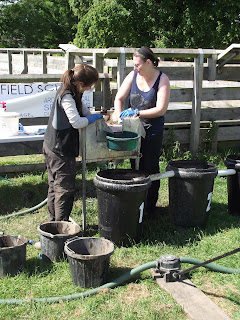 Down on numbers a little today, as six of out students were back in Durham doing an introductory session on Environmental Archaeology alongside some members of the Durham Arch & Arch. Environmental archaeology is a key element of the project, particularly as we are beginning to encounter some good dark deposits, which look like they might have good organic preservation (let's not forget our plumstones from the big pit!). This year, for the first time, we are doing some environmental processing on site; our environmental archaeologist Carrie Drew is supervising our students doing some flotation of some of the samples we've taken. This involves washing the samples in running water, the heavier silt sinks to the bottom, whilst the lighter organic remains (such as charcoal, grain and seeds) floats to the top and can be skimmed off and kept for later analysis. Our flotation kit is a clever set up which allows us to recycle the water we use and has an impressive range of silt traps (aka dustbins!). Work is going well on this front and we're certainly recovering some interesting material

On site, in Trench 1, George has nearly finishe his stone-lined pit, and we are continuing to pick away at the stones between the barrack and the small structure- this is revealing some walls, but on very odd alignments! We are also now moving on with excavating the big pit, which produced a fragment of copper with what appears to be gilding surviving on it. In Trench 2, work is still focusing on the larger building at the east end of the site. Nearly all the walls are defined now. Importantly, our two areas of darkish earth are turninng into what appear to be more stone lined pits (on quite an impressive scale)- however, these don't seem to contain as much bone as some of those in Trench 1- they also have much darker fills which should have good organic preservation. Tomorrow, we start planning and recording Trench 2 with a vengeance
Posted by David Petts at 13:04