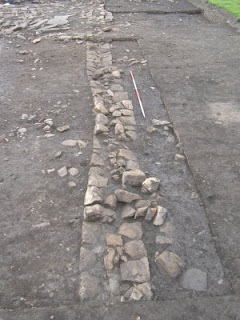 A quiet rather than a spectacular day Everything has been humming along nicely. Work on the road has revealed a number of features cut into it (in addition to the various layers of metalling and patching). At least one substantial gulley has been sectioned; this appears to be on an entirely different alignment to anything else we've found so far, so its cleary not a roadside ditch or a drainage channel. It is just possible it is related to a new surface of large-ish stones we are revealing just the other side of the baulk (though that remains very very speculative). Elsewhere, planning has continued at the northern end of the barrack, and further definition of the features cut into the floor level. More has been taken out of the big post-med and/or late Roman feature. We still can't see where we've missed the cut, though the area being excavated still continues to reveal nothing but late Roman material. Further cleaning to the west of the main barrack wall has revealed a series of poorly defined rubble features at regular intervals along the line of the barrack. We've not really tried to define these in detail yet and their function is unclear. It is possible they are post-pads for a later building (although if it takes just two stones in a row to be a wall, it takes just one stone to be a post-pad!).
Posted by David Petts at 14:47