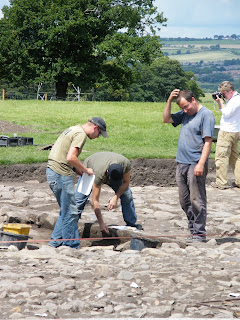 After a great weekend which included the Durham Miner' s Gala on Saturday and a trip up to Bamburgh Castle and Holy Island on Sunday, its back to the grindstone for us today. I can't report on much detail as I wasn't able to be on site this afternoon. This morning the work was basically continuing Friday's work. In the northern end of the main building a series of features cut into the floor surface are being excavated, including a couple of post-holes which lie close to the west wall. A little to the south more stones were removed from the possible pit cutting the west wall. This continues to reveal medieval (14th/15th century pottery). On cutting back the section of the adjacent sunken/cut feature in the centre of the structure, a large piece of copper alloy sheeting (c.5cm x 10cm) was uncovered. It was hoped to lift this in one piece; its not in good condition though, and its not clear precisely what it was. Over on the roadway, more features cut into the metalling are being reveal, and it appears that two areas of rubble close to the rampart may actually be sitting in cut features, rather than being simple spreads. 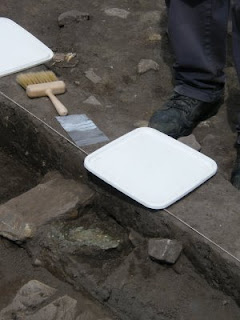 The mystery copper alloy object in the course of excavation
Posted by David Petts at 14:31