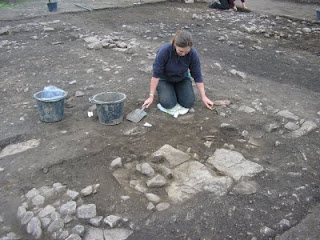 Another from David M.

" It was surprisingly a rain free day until 4 o'clock when the volunteers were in fact clearing the sight. Again this was largely a day in which the volunteers did a great deal of trowelling in search of features. Of course some finds were made such as a coin, pottery and a possible ring but few clear archaeological features could be identified. However, two walls, to the north of the site, were uncovered by the volunteers and work continued in cleaning them and defining the stones involved.

The volunteers were also given the opportunity to assist in the planning of the site, which they found to be a valuable aspect of the "archaeological experience".
Posted by David Petts at 12:35