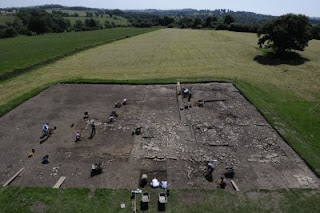 It was a hectic day on site today. This morning's excitement was caused by the arrival of Adam Stanford of Aerial-Cam. He bought a mast-mounted camera set-up attached to a Land Rover. The mast extended to about 20m above ground and allowed to take some fantastic near vertical shots of the site (see some of the photographs below). This proved really useful. Although we have many plans of individual areas of the site they have not been collated yet; Adam's excellent photographs allowed us to really get a clear idea of the layout of the site. It was fascinating how the different perspective of these photographs really altered our sense of the site. For example, the bow-sided building turned out not to be anywhere near as bow-sided as we thought. Also, it became clear that a long spread of rubble on the eastern edge of the site had a much straighter edge that previously appreciated, and what we had assumed was a late-Roman rubble revetment clearly overlay parts of the (non-)bow-sided building. At some point we hope to be able to rectify the images using the plans we have drawn which should give us some fantastic vertical site shots. 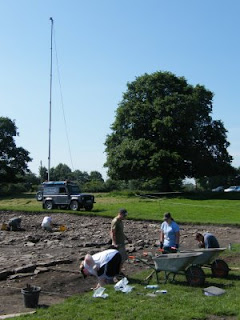 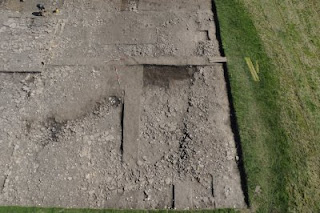 The (non) bow-sided building (we need to think of a new term). You can clearly see the long pile of rubble overlying the right (east) end of the structure

Work continued on the site despite the distraction of the camera on a very long pole. Mainly we were continuing cleaning and defining the new areas of the barrack. It appears that what I've termed the 'sub-Roman pit' continues northwards and appears to cover much of the interior of the northern end of the barrack, and appears to cut areas of the floor surface. If the rest of this feature contains as much cattle bone as the small area we've excavated so far it is going to provide a really good assemblage for later analysis. 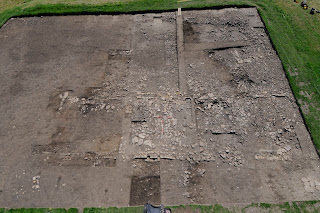 Aerial-cam shot of the 'barrack block; the large dark feature can cleary be seen in the centre of the left-hand part of the structure 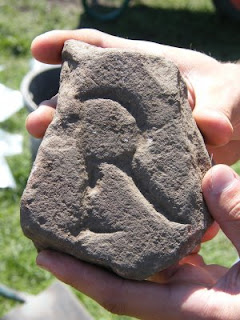 Finally, find of the day, a tiny fragment of a Roman inscription! Sadly, it just comprised an individual letter 'R'. Hopefully, we'll find more of it!
Posted by David Petts at 11:35