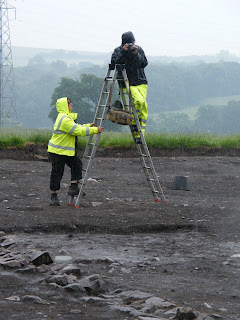 Half a day’s digging completed today; lovely weather in the morning, but rain came up at lunch time, so we decided to ditch it for the day, though we used the early finish as an excuse to visit the nearby Anglo-Saxon church at Escomb. Despite the short day, some useful work was done. Much of the morning was spent cleaning up the north end of the main building for a photograph (which took place in the rain). Elsewhere work continued bottoming out the large post-medieval feature; we appear to have reached a stone lining. We also had a visit from our coin expert, Philippa Walton and the new County Durham Finds Liaison Officer, Frances Macintosh. They took the opportunity to have a look at our small finds and coins. Frances was able to identify a variant of a knee-brooch and part of a trumpet brooch, amongst other bits and bobs of Roman and medieval date. A quick review of the coins showed that, not surprisingly, the majority of them were mid-4th century in date, although the latest were a couple of examples belonging to the House of Theodosius (AD388-402).

I’ve been looking at the gadget which records visitors to the this blog, and I can see we have readers from all over the world, including (in the last couple of days) the US and Russia. If anyone has any questions about the site or simply wants to let us know why you are interested in Roman Binchester we’d love to hear from you.
Posted by David Petts at 12:25