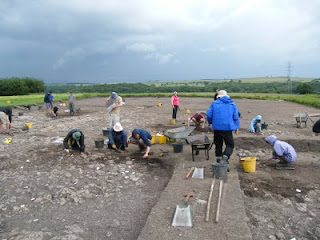 Back to work today after a busy weekend. Yesterday, we visited Segedunm (Wallsend), Corbridge and Vindolanda, as well as squeezing in a stop at Milecastle 42 at Cawfields. It was a great opportunity for people to get a feel for the potential at Binchester. Although most of our site is under fields, the chance to explore Vindolanda in particular reminded everybody of how much might survive at the site; the fact that the Binchester bath-house is so well preserved is a good indicator of possible preservation elsewhere. The Vindolanda visit was also very informative as Andrew Birley gave us a brief tour of this year's excavations in the North West quadrant of the fort. Whist the most spectacular discovery was that of a small shrine to Jupiter Dolichenus (including a beautifully carved altar), from my point of view the most interesting aspect was the similarity of the late activity on their barrack blocks to ours; lots of reworked walling and spreads of rubble (although they were further ahead in the excavation than we are). Crucially, they have recovered evidence for occupation as late as the 8th/9th centuries AD. At Binchester, we know there was activity at the site in this period, as a number of burials of this date have been discovered; it would be fantastic if we’ve recovered occupation evidence of this date. It remains a strong possibility, although the chronological evidence for our late/post-Roman activity remains tantalisingly slight.

We were lucky with the weather today; although thunderstorms circled us all afternoon and we dug to the accompaniment of constant thunder we avoided a soaking. Planning took place around the post-medieval feature. We are now excavating a section of this feature on the other side of the baulk; intriguingly so far this has produced no medieval ceramics. Have we missed a cut in excavating the other side? Was this in fact an early feature cut by a later feature?

More work took place defining of the northern end of the main building. The western wall has clearly toppled sideways at some point, and the apparent bend in the wall was clearly caused by this collapse. The eastern wall is still very patchy; the north-east corner appears to have been supported by a number of very large stones, very different to foundations elsewhere. It is possible that it may have had to have been supported or re-inforced at some point; this is the same wall which appears to have had a stretch of double-thickness walling in places. There are also hints that it may the wall partly extends over an area of metalling, although this is still far from certain. 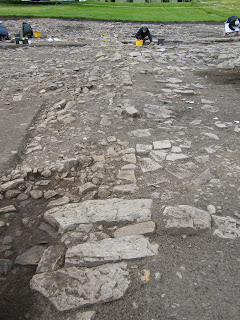 North-east stretch of walling of main building (looking south). You can see the large stones used to re-inforce the north-east corner 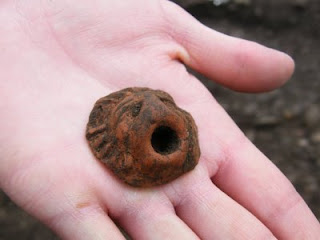 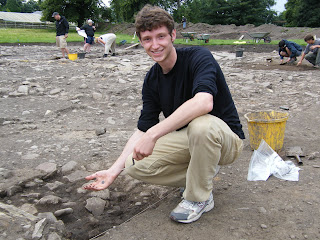 The proud discoverer of a Roman coin!
Posted by David Petts at 12:46