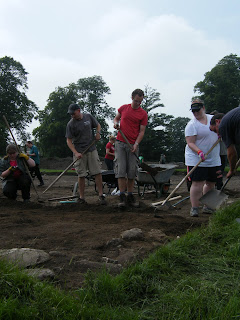 Busy day today as our partners from Stanford arrived on site (although thanks to the baggage breakdown at Terminal 5 yesterday much of their luggage is not yet here). They had an introductory talk by David Mason (County Archaeologist) and then a site tour. We then got them working! You may remember that much of the northern part of our site has only had a superficial clean following the initial topsoil strip, so we decided to return to this area and give it a more thorough cleaning. This will allow us to get a sense of what is happening on this part of the site. It is clear that the barrack block extends into this area, but it is not clear how much activity there is in the north-east quadrant of the trench. Despite rather muggy conditions, the Stanford students and students from Durham were able to get about half of the area cleaned (though as elsewhere on the site, this is likely to be an on-going process we will return to regularly).

I’m aware that I didn’t do a ‘finds catch-up’ last week; as soon as I’ve enough new photographs I’ll post an overview. However, this is a good chance to flag up two nice discoveries. There is a nice fragment of jet or shale bracelet decorated with a distinctive ring-and-dot; very similar examples are known from South Shields where they may have been manufactured. We’ve also had a small lead sealing (probably for sealing bales of cloth, foodstuffs or even official documents); it bears the letter DEC and AR[I]? (last letter not quite clear). I’ll see if I can find any parallels. 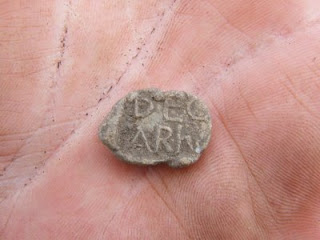 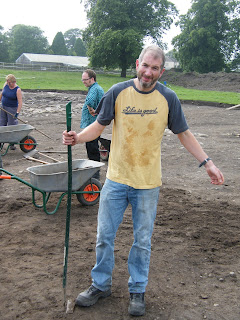 Matthew is this month's Mr Binchester. He describes himself as a 'top history boffin' and likes nothing better than drinking pina coladas and taking walks in the rain
Posted by David Petts at 13:09