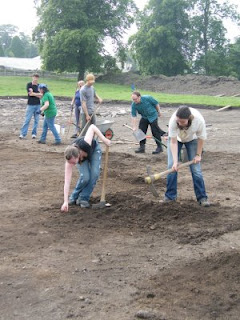 Another muggy day! Whereas yesterday was dominated by large-scale cleaning of the northern area of the trench, today was mainly more selective cleaning. A number of people were back in the southern area of the trench working on defining the edges of the cobble spreads around the bow-sided building. This is helping to resolve this complex area, although there is still much to do. Elsewhere we had given up using the hoes and were on our knees troweling trying to remove the final outstanding islands of topsoil and related layers. This is very instructive and we are now starting to define various stretches of walls within the northern part of the trench. Obviously the main walls of the barrack are appearing, but also there are also some smaller stretches of certain or probable wall making an appearance. Some are clearly related to the barrack structure (although at this early stage they appear to be of a slightly different construction- what does this mean?). Other stretches are appearing in the north-eastern part of the stretch and seem to be overlying the putative intra-vallum roadway, which may indicate they are relatively late.
Posted by David Petts at 14:20