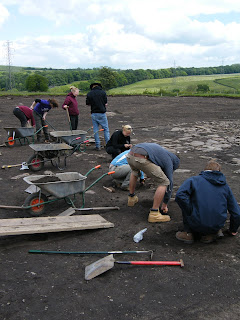 I didn’t get to spend as much time on site as I’d hoped today due to the demands of getting my car repaired and the joys of paperwork. However, when I did get out my first reaction was relief; despite the ridiculous amount of rain we had yesterday the site had not turned into a quagmire. The advantage of digging a site on the top of gravel plateau is that it drains well; though if we get a sustained period of hot and dry weather it’s going to become a dustbowl.

Work continued apace. Personally I feel the most confusing feature is the large dark feature in the middle of the barrack block. We’d been optimistically hoping it was an early medieval sunken-featured building/grübenhaus. However, so far its only revealing late medieval green glazed pottery If this was just in tiny fragments I think we’d be happy that they were simply related to medieval manuring. However, they are appearing in large chunks and at depths below the level of the walls of the presumed Roman barrack. How did this material arrive here? Was the feature actually of late or post-medieval date. It is conceivable that it was cut from a high level but the top of the feature had been destroyed by post-medieval ploughing meaning that we only picked it up at the level it cut the late/sub-Roman deposits; I think we need to revisit the topographic survey and see whether there is any evidence for a large feature cut through the ridge and furrow which appeared to seal the site.
Posted by David Petts at 12:41